I’m super curious what people are working on- and would love to hear about what you’re planning on showcasing during this Spring Thing- maybe consider this a preview of the garden assortments?

There’s a wonderful blurb and cover art thread started for this year- but I’m also interested in whatever odds and ends you want to share, so here’s a few ideas: chattering about your favourite character, which of your little muses or puzzles have been giving you the most grief, themes you want to explore in this year’s work, something you’re really proud of, something you’re anticipating how people will react to- whatever’s on your mind!

Hoping that this is allowed! My apologies if it isn’t.

Well, the title of my game is Vagabond. It’s a piece inspired by an old Infocom game. Which? I’ll let you decide later. This will be my first publicly released game and also my first comp/festival game. I can’t get too much into the content without spoiling things I’d rather not. However, I can tell you that I had a hell of a time figuring out how to get Inform to recognize the system clock and getting that to work with the rest of the game. Also learned a ton about how to (and more-so how NOT to) go about making a game.

I’ve been putzing about with inform for over 3 years now, and I have a half dozen unfinished games and nothing to show for it. So, this year I’m taking the plunge. I’ve already registered to Spring Thing, Ludum Dare, the Text Adventure Literacy Jam, and Parsercomp. I also intend to enter Introcomp, Historically Accurate Game Jams 6 & 7 if they happen, IFcomp, Ectocomp, and anything else that opens up that will accept either an inform 7 or twine game. Whichever entry I feel the best about, I was going to pay the entry fee and enter it into the Independent Games Festival 2023 (they take submissions during the previous year, roughly August/October, and it doesn’t have to be unreleased). Long shot, I know, but what the hell.

Basically, I’m jumping in the deep end and hoping for the best. Wish me luck.

I’m working on a sandbox game called Bigfoot Bluff. Rather than solving a set sequence of puzzles, you solve 3-5 of 20 puzzles to accumulate points. The the end-game is triggered when you earn enough points. 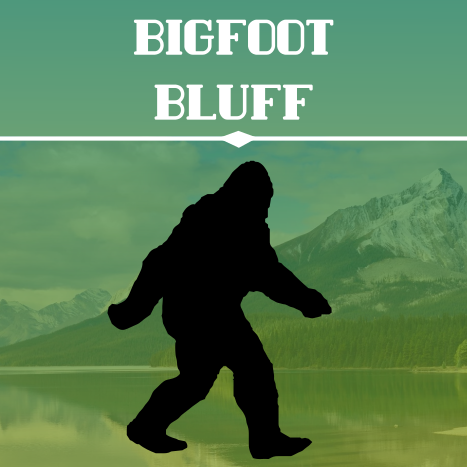 Wow, you really are jumping right into the deep end! I hope that you enjoy your time entering into all of those competitions- and that pesky burnout steers clear away. Hopefully feedback from reviews helps you with picking out your darling of the bunch. Fingers crossed for you on the Independent Games Festival in 2023! I’m a bit too young to remember Infocom- (Googling it, it looks like they went out of business about a decade and some change before I was born, which, figures, haha) but it’s cool that you’re making yours an homage of sorts!

Also, we’re both first timers for releasing a game for Spring Thing! High five. I’m planning on dropping mine into the backgarden- it’s wonderful that the community has a lower stakes, more relaxed atmosphere for games that stray off the path a bit.

Untitled Goose Game was a riot- your concept sounds really fun! I imagine the community’ll receive it well- from snooping around the forums, a lot of people seem to enjoy brain teasers and turning puzzles over.

Your cover art’s neat- it reminds me a bit of the MSPA (MS Paint Adventures) inspired style with the gradient colour overlays on a photograph and crisp art overtop. I like the balance of the more clean elements (big blocky text, the silhouette) with the busier photograph faded slightly so it all reads quite cohesively.

My game is an amalgamation of a whole bunch of Grimm’s fairy tales, with multiple endings. It’s more of a quest/exploration game than a puzzle game… there’s really only one puzzle in it. I wanted to make a game that would be friendly to people who generally don’t play parser games, or who aren’t puzzle lovers. I took a lot of pains to make the parser very friendly, with lots of implicit actions and trying to eliminate any guess-the-verb frustrations.

It’s my second game, and my first Spring Thing entry, too!

I’m not positive it’s going to be finished in time since we miiight have bitten off more than we can chew, but we’re hoping to enter a heist game called Lady Thalia and the Rose of Rocroi. It’s a combination of mostly social puzzles during the day (while you’re casing the joint) with more traditional Twine puzzles at night during the actual robbery.

(It is a sequel to our Spring Thing entry from last year, but hopefully it’ll work as a standalone. Fingers crossed?)

If I can get it finished and tested in time (it’s coming along nicely so I’m hopeful!) I will be entering a modern-day English village mystery game. I’m hoping the title will come to me when I do the final pass on the prose writing in the next few days!

Mine’s an Adventuron game called Custard and Mustard’s Big Adventure. It’s a sort of madcap summery lark involving a couple of dogs, some treasure and a village fete, that I succeeded in amusing myself hugely during the writing of - and that, after all, is the most important thing.

I’ve had a small army of testers crawling all over it, so I do feel obliged to get it polished up and submitted now!

I’ve been putzing about with inform for over 3 years now, and I have a half dozen unfinished games and nothing to show for it. So, this year I’m taking the plunge.

I have 1 finished game and 4 unfinished games after a year of putzing with Inform! Decades of game ideas are all breaking the dam now that I can code a little bit. I was really scared about entering IFComp last year with my first one, but now I’m addicted. You’ll love it!

Lady Thalia was definitely in my top three last year. And I’m normally glued to the parser.

I remember thinking about your game: “Damn, I gotta get some of these faulty preconceptions about Twine out of my head.”

My game is an amalgamation of a whole bunch of Grimm’s fairy tales, with multiple endings. It’s more of a quest/exploration game than a puzzle game

Were you at all influenced by the Into The Woods, or are musicals something not on your radar?

Thanks so much! I hope we can recapture the magic on purpose this time.

For anyone interested in last year’s Spring Thing, my personal favorites were:

Highly recommend checking out all three of them if people have time. (The Weight of a Soul in particular takes several hours to play but is very very worth it.)

I actually learned about Into the Woods while writing this. I’m a classical opera person, not a musical person. What inspired me was Emily Short’s fractured fairy tales. I thought it would be fun to fracture ALL the fairy tales and put them in a blender.

I’m entering a mid-length fantasy adventure with a skeleton as the main character. She can detach her various body parts and move them independently, and most of the puzzles are centred around that. I’m so happy I managed to make the navigation and inventory parts of this game work in Twine! Other than that it has wizards, mice, at least two explosions, and some rather creative cooking.

This sounds right up my alley!! I’ve tried out a few parser games sporadically, but found it was really difficult to understand how to progress- I think it’s mostly due to not really having a bank of typical verbs in the back of my head players more familiar with parsers might have. Plus- who doesn’t like fairy tales, haha. I’m excited to give yours a go when Spring Thing is upon us!

I have a VERBS command in the game that will tell you every verb you need to use to win the game (about 10)! I absolutely hate playing guess–the-verb in parser games, and I’ve seen how frustrating even “normal” parser verbs can be for newbies, so I tried hard to make it as friendly as possible.

The best news I’ve had all day is that your game has multiple mice in it, yay! Curious about the cooking aspect of your game- the premise seems very interesting with detachable body parts and how that might factor into gameplay. Congratulations on getting the navigation and inventory working in Twine- that sounds like it was tricky, judging from all the help posts centering around inventories one sees floating around in Twine spheres.

Oh, that sounds fantastic. I’m not really much of a hardcore gamer, and generally play on easy or story modes just to have fun and muck around in the world the developer’s created, so having that VERBS command seems perfect for being able to hop right into having fun rather than having to try to look up a walk through or play through or wiki!

Your cover art’s neat- it reminds me a bit of the MSPA (MS Paint Adventures) inspired style with the gradient colour overlays on a photograph and crisp art overtop. I like the balance of the more clean elements (big blocky text, the silhouette) with the busier photograph faded slightly so it all reads quite cohesively.

Thanks! I am not too familiar with MS Paint, it was more just a need to work with creative-commons licensed stuff. The Bigfoot Silhouette is from Wikipedia.