If you’re the right age then you definitely remember Crocodracula, the terrifying soap opera for kids from the early nineties. If you’re too old, or too young, or your parents (wisely???) prevented you from watching, the show was a lot like Land of the Lost, but in a kind of modern gothic horror mode instead of cavemen and dinosaurs. I’ve also heard it described as “Dark Shadows for tweens” but I don’t know how accurate that assessment is.

HOWEVER, even nineties kids don’t necessarily remember that there was at least one Crocodracula computer game, released by Taleframe in 1991. I say “at least one” because the title, “Crocodracula: What Happened to Calvin,” makes it sound like they were at least planning to release other games, possibly based on other episodes/story arcs from the show. It’s hard to tell. Crocodracula information is really hard to come by for some reason.

The point is, I now have a copy of this game. 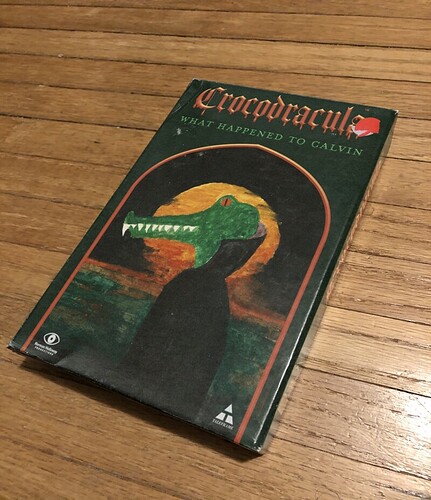 I don’t want to say too much, but I have a relative who works in law enforcement, and certain people were cleaning out certain evidence lockers, and I guess someone said “hey, Ryan likes text adventures, right?” and here we are.

Taleframe games are notoriously hard to play nowadays, due to their extremely clever and frankly mean-spirited copy protection methods. The first time I got this thing to run was on a modded increased-voltage Amiga 3000; however, after a lot of tedious futzing around, I now have a “stable,” “playable” version of this game that “will run” on modern machines.

This is the part where I give you a link to a sketchy .tfr file, followed by 17-step instructions on how to emulate 25-year-old conditions on your machine, making you install this so you can install that so you can run another thing, and then a week later, if everything works perfectly, you hate the game because it was so much trouble to play—and you probably hate me by association. And whether it works or not, you’ll spend the rest of your life wondering exactly what things I made you download. We’ve been here before. I don’t want to do that to you.

So I did the math. Although it would be sooooo much easier for me to give you the .tfr and wish you luck, I figured I could save the universe of Crocodracula fans thousands of hours of consternation if I expended the hundreds of hours it’ll take to convert this game into a format that doesn’t actively hate the user.

All this work is paying off, and it looks like my Inform 7 port of Crocodracula: What Happened to Calvin will be live sometime this month. So look forward to that!

Work continues apace on this groundbreaking restoration of a lost classic! A few notes:

This is Becca’s map of Opasassa, Florida. You can tell that it depicts specifically the landmarks that appear in this particular game, so it’s not the definitive Opasassa map or anything. Here’s a slightly cleaned-up version of the map that you can hopefully get some use out of when navigating the game. This is a piece of paper with a bunch of numbers on it! It figures into the game somehow. I went ahead and digitized it for you; if you get far enough in the game, you will probably want to print this out. It’s Becca and Zoe’s amulet! Or, a cheap facsimile of the amulet! I don’t think it matches the actual show prop very well at all. The chain is sized for fifth-graders, which I guess makes sense, but it serves as an uncomfortable reminder of how long it has been since I was in the real target demographic for this show.

You should probably upload the original somewhere for preservation’s sake.

I’ve been trying, but the files are in a very precarious state due to Taleframe’s straight-up nasty copy protection. I’ve had to simulate 1991 conditions in a series of nested partitions to convince the game that I’m storing it on authorized hardware and prevent self-inflicted cascading bitrot. It’s a lot like that episode of TNG (spoiler alert!).

Don’t worry, though. As long as I don’t have a power outage, and I keep the ambient temperature within acceptable limits, and I don’t jostle my hard drive, I’ll have the original available—so I can make any necessary tweaks to the I7 version.

I think that link should go to rcveeder.net/draco/ … right?

Whoops! A little subliminal self-promotion! Thanks for the correction.

There is no original, is there. You made it all up

I didn’t even know a Crocodracula game existed! It’s good to finally have this available.

You’re lucky you have the original amulet; my box was a second run, so it just had a picture of the amulet.

I really don’t appreciate being accused of making stuff up, fabricating game files, lying, or executing a complicated con artist scheme. My fellow 90s kids will vindicate me: Crocodracula was a great show, and this cheaply-produced tie-in game is pretty good too.

Um, well, personally, I wouldn’t call it a great show… I definitely watched Land of the Lost a lot more.

But this text game seems fun so far!

I’m stumped on one crossword. I feel like a fool. I never would’ve gotten it as a kid if I can’t even get it now. I need to apply myself more.

You might find the crossword easier after you’ve played the game once. Whether you need to apply yourself more is between you and your guidance counselor.

So I’ve been playing, and I’ve done the crossword and gotten rid of my follower. But now I can’t get through the swamp! I’ve been following the directions, but nothing happens at the end, and sometimes when I RETURN, the boundaries have been reset so the very first swamp room won’t let me go SOUTH (which matters) or sometimes WEST (which doesn’t matter).

Am I missing something about navigating the swamp?

Yeah, that’s my bad. Sounds like RETURN isn’t doing its job. I can patch the game in just a second here.

Congrats on solving the crossword without beating the game! I think that’s what the kids today call a “sequence break.”

Well, whatever works! As adults, we aren’t bound by the same standards of ethics that we apply to youngsters and their “edutainment.” (If there are any youngsters reading this, I apologize for the term “youngster”—but not “edutainment,” for which I cannot be held culpable.)

I think I got the RETURN verb to work the same way it did in the original, and I’ve uploaded revised versions of both the .gblorb and the browser-playable files, so everything should be great now. Thanks for the correction, again.

Does your version have PLACEHOLDER TEXT GREAT SONG as a response? It makes me wonder whether there might have been trouble securing copyright to quote particular lyrics.