Trying to identify a retro game

I have some faint but distinct memories of a very old-school text adventure, which I think I played in a TRS-80 emulator. The setting was that old chestnut, a mental hospital/insane asylum, and one puzzle required getting caught and injected with a substance that randomized your movement—letting you bypass a separate area that restricted your movement. Afterward, you needed to say the word PLUGH (completely unclued) to get your movement back.

Does anyone else remember this? I haven’t been able to find it on Google or in Dyer’s All the Adventures project. It certainly wasn’t an especially good game, but I want to look back at it again with seasoned eyes.

I don’t remember it personally, but a search turned up Bedlam, which looks like the game you’re after.

Yes, that’s the one! It’s all coming back now. And it’s from 1982, so it makes sense that All the Adventures hasn’t gotten to it yet.

I have no idea how I ended up playing this one random TRS-80 game, but I certainly never managed to beat it.

EDIT: Ah, and apparently PLUGH is in the manual. The more you know!

Considering how manuals may not have, ah, exactly accompanied each copy, it might as well have been early copy protection

(Please note that my liking of the above post should not be construed as an admission of guilt.)

One other place you might try when looking for this thing is Dale Dobson’s page at Gaming After 40 – he’s done a lot of TRS-80, and he indeed did Bedlam already: 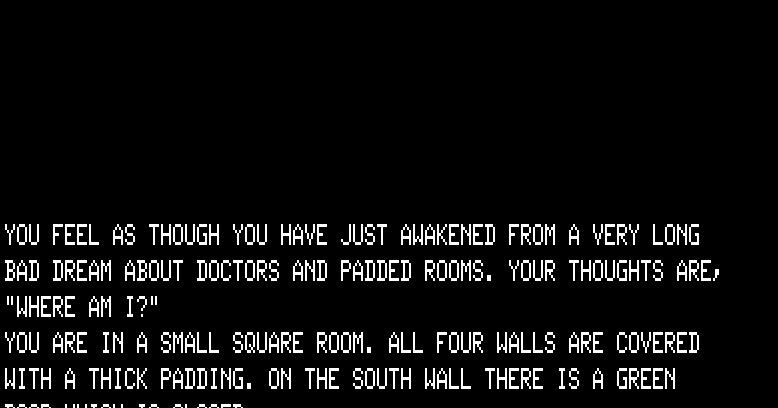 This week, we're exploring the halls of Bedlam , a text adventure published in 1982 by Radio Shack for the company's TRS-80 Model I/III and ...

I’ve got the first half of 2023 roughly planned out (…assuming Ferret only takes one final month to get through…) and Bedlam unfortunately isn’t until at least the summer, but if you really need it bumped I can probably shuffle a few things.

No rush, I look forward to reading it whenever you reach it!

I don’t remember it personally, but a search turned up Bedlam

OMG, I remember buying that game at a Radio Shack back in the 80s! It was packaged in a ziplock bag on a cassette tape with a printed color cardboard sheet with the art and photocopied instructions for the TRS-80.

I remember it being very unfair and I never got far. This was back when text games were commonly cruel and obtuse outside of Infocom.

I would make a comment about Infocom’s standards for cruelty and obtuseness, but…yeah, even by that standard Bedlam doesn’t measure up.

I’m shocked to see that you can use the hook to get the green key without needing the random movement, though! That was the one puzzle I remembered as being very clever.

I would make a comment about Infocom’s standards for cruelty and obtuseness, but…yeah, even by that standard Bedlam doesn’t measure up.

I remember it didn’t understand a lot of things parser-wise. Infocom was potentially cruel and obtuse for plot mechanics, but it usually understood what you were trying to do. Bedlam was practically VERB NOUN.