I recently decided to delve back into IF as I’ll have some long nights to fill during my night shift helping take care of a family member. Looking around, Trizbort looked like a fun tool to try. I finally figured out what I needed to do but I got Trizbort working on my Macbook using Winebottler yesterday. I tested it and it mostly worked with minimal problems. After spending most of today trying to figure out how to get the source code from wertle’s updates on Github compiled to make an .EXE file to incorporate some of the features he added, I finally noticed his link to an already compiled copy (thank you wertle). I am not a programmer so having a version already compiled is a big help as I could make no sense of some of the errors my PC spit out at me.

For others looking at using Trizbort on a Mac, here is what I did (maybe someone will port it someday):
1.On my Mac (running OSX 10.8.5), I installed WineBottler, then downloaded Trizbort.
2.I right click on Trizbort.EXE and choose “Open with” -> Wine.
3.Instead of selecting to convert, I choose the option to “Run directly in…”.

So far, there are three issues I have seen.

A.I tried to use the Automapper but it never did seem to import anything from the script command I ran. I tried it with 9:05, but I will try again to see if maybe I was doing something wrong.

B.I noticed that the bar that appears when I start Automapper on my PC seems to be constantly visible at the bottom of the screen. I hit stop and it continues to remain visible. It is also covering up the bottom scroll bar, forcing me to rely on other means to scroll left/right.

C.Text sometimes gets displayed improperly. For example, I may be typing in the name of a newly created room and the letters do not display properly, but seems to fix itself if I hit backspace. It seems to have no effect on what the map shows, just what I see when typing. The text problem also exists in the Tools menu. Some of the tabs do not fully display the tab name, and under the options to adjust the numerical values of some settings, the full number gets cut off. Here are some pictures: Text Display Error and Menu Error

I suspect some of the errors are a result of running it on my Mac. They are all minor to me, though the Automapper would be fun to test out. I’ll try that on my PC. However, I thought I would post them in case someone has a thought that could assist fixing them or someone adventurous enough to port it comes along. And I’m hoping my steps to get it running on a Mac help others.

FYI, the automapper relies on a transcript log that’s always being updated. Meaning, every time you enter a command, the resulting text is immediately added to the transcript, as opposed to, say, the transcript being updated every other turn and/or upon exiting the game.

Dunno if that’s what’s going wrong in your case, but it might be worth checking how often your interpreter updates the transcript.

I don’t post over here that often, but I just recently learned a bit of XSLT and made an XSL stylesheet for Trizbort’s xml map exports that I thought I would share with you all. I’ve named the stylesheet TrizbortRT and have included it in the attached zip file below the screenshot along with a readme file. It creates a Room Table from your XML export file.

At this time it doesn’t list room connections, but if I figure out a nice way to do it I’ll revisit this. 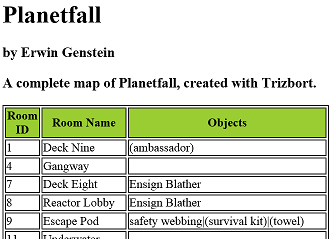