To Burn in Memory - Atemporal Exploration

Just thought people here might be interested in my latest project:
https://sauhiro-orihaus.squarespace.com/to-burn-in-memory/ (Moving hosts, but this link should work fine).

If anyone is interested in testing, PM me and I’ll sign you up (Scheduled to begin in about a month).
There are small excerpts from the work accessible from that link, so constructive criticism welcome, though there’s not much publicity announced to talk about. Feel free to shoot me questions though! 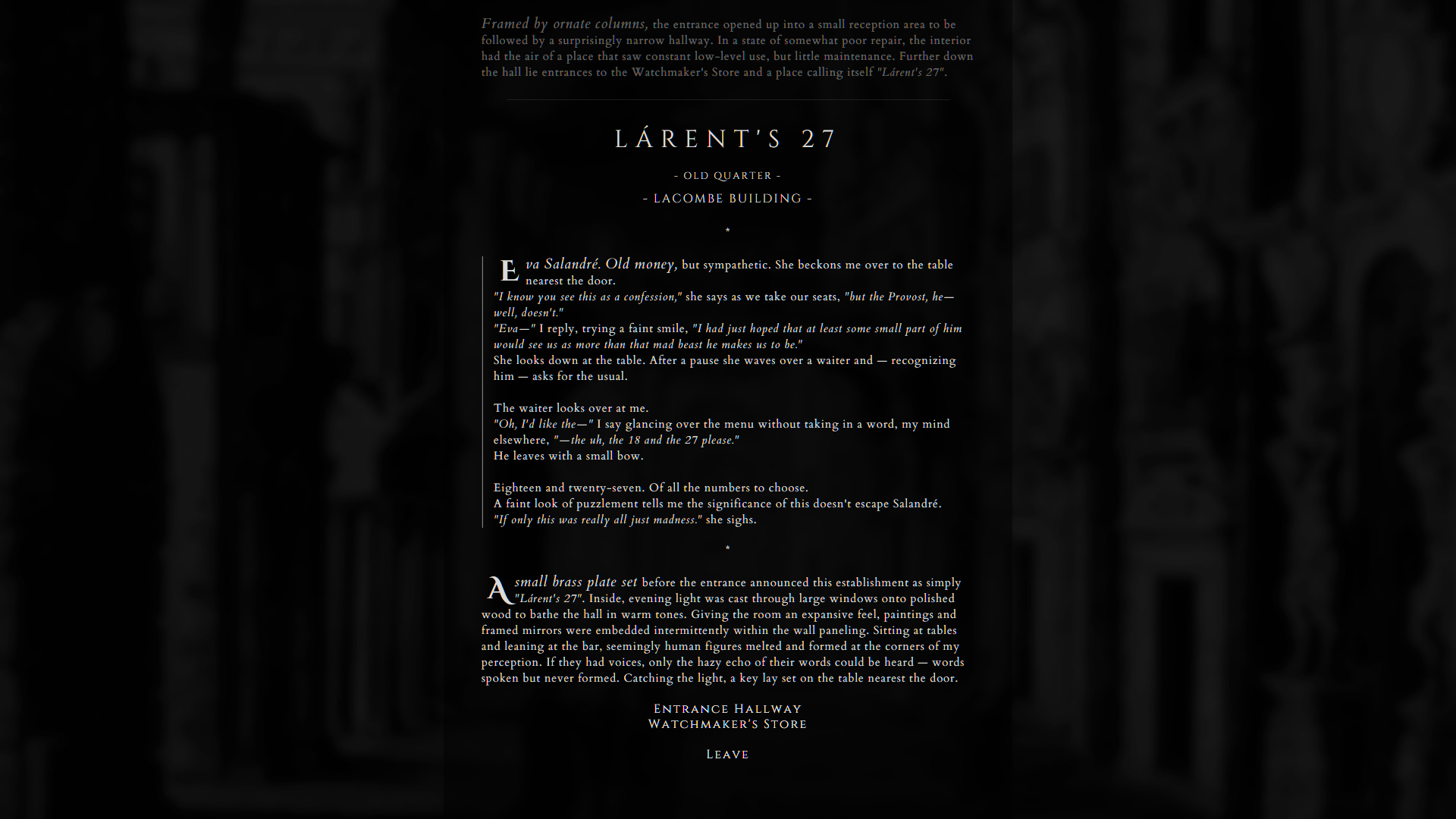 Really happy the game is in a stage where I can post screenshots. Still need to put a little more work into the engine before I’m happy with it, but totally on schedule!

I have a question about the IFComp deadlines,

“September 28: The last date that authors can upload their games to the competition site. Judges start sharpening their silverware.”

Does that mean the version uploaded at that date will be the one judged, or can I keep pushing changes after that?

IIRC, from the past IFComps, updates are now allowed - but there’s no guarantee that the updated version is the one people will judge. If I download and play and rate your game on the first day, and you fix game-breaking bugs the next week, my rating stands (unless I want to replay and re-vote, but I’m not obligated to); if I didn’t play your game until after your bug-fix, I’ll rate the updated version. Simply because it’s the one I’ll have played. IF I decided to take the trouble to download your update. There’s no guarantee.

Basically, you’re seriously encouraged to present the game in as polished a form as you can first time around. That said, updates are possible. If you push changes every day after the release, though, people will probably be going “Why wasn’t this properly finished before it was submitted?”, which is another thing you don’t want.

Post-comp updates, all nicely polished and shining, are traditional. So as a player I’d really recommend that you submit it in the shape that you really feel it’s worth submitting - having been beta-tested first, of course - and take all the reviews and criticism that’ll pop up during the comp and make a post-comp version if you feel it’s worth it.

Honestly, the recent “updates are allowed” rule has ensured that I don’t play any of the IFComp games until the comp is over.

I got burned with Andromeda, playing the first version when it came out, and that went through some serious overhauling even during the comp.

Thanks, the process makes much more sense to me now!

Hit about 75% of the word count, and the engine is about complete. Music is in a good place too. So here’s freshly minted glimpse into the fragmented memories you’ll be exploring: “A Traitor’s Farce (Marcel II)”: http://www.noctuelles.net/blog/2015/9/6/fragment-iii-a-traitors-farce-marcel-ii

Hit 120% of my word count and still quite a few scenes to go. Confident I’ll make it for the 1st however! Graphical elements are in the works as well. Here’s another look:

Your interface is absolutely gorgeous. Is it very modified Twine, or Undum?

Which is nothing I ever heard about but looks good.

Thanks! Actually I’m using an entirely new engine and markup language that I built for this. I’ll be releasing the source along with the game.

I was originally intending to use Paradise, but what I went for instead was a custom setup similar to it, which was built with help from the creator of Paradise, so you’re not far wrong!

Just a note to say that if anyone’s been having problems accessing the url for the final release (http://toburninmemory.com/), just try again, the issues have been resolved, it should work fine now.

Hi, I think part of the issue is that with one of the updates, the “play online” link turned into a “download” link. I think you may have entered the URL in the wrong box in your update.

@matt w, I think you’re right! But I don’t seem to have any control over providing a “Play online” link in the entry settings.

at the moment I’m on the landing of the library and my only choice seems to be to go out to the balcony–I can’t get back down. I think there might be another choice that has scrolled off the bottom of my browser window; is that possible?

There’s currently an issue with the bottom of the page getting cut off, try making the window bigger/fullscreen. I’ll look at it right now.

Added back the scrollbar to prevent the bottom cutting off on monitors smaller than 1080p. I had it removed since my intent was to not need it, but that seems like a mistake now.

Also, thank you very much for providing a downloadable, offline-playable version. Please do make sure to update that as well so I can later download and play, uh?

[i]"Just a note to say that if anyone’s been having problems accessing the url for the final To Burn in Memory release (toburninmemory.com/), just try again, the issues have been resolved, it should work fine now. Also, please only play the game at that location as the version in the zip file cannot be completed and is quite broken (I only uploaded it as to not be disqualified, in retrospect I should have just put up a url like for the current download).

If anyone’s curious as to why it has to be like this, if you try playing the “offline” version without an internet connection it will not function since it references webfonts and online libraries."[/i]

I short, there is no offline version!

BTW, thank you for taking the time to explain why an offline version isn’t possible, that was kind.

Going to post this again since I just saw a review that was definitely of the unfinished version: please only play the version found online, not the version in the competition zip.

http://toburninmemory.com/, is the only place you should be playing it!

Technically, judges can play and review any version they want. They can download the zip at the beginning and nothing else. It’s happened to me in past years.