I"m thinking I might write an IFComp game this year. Started writing it in I7, but I’m quickly realizing I still prefer T3/adv3lite. Not to kvetch about I7, let’s just say it’s my taste in coding.

So I’m wondering whether the interpreter software for T3 games is good cross-platform. No point stabbing myself in the foot with a pitchfork if it’s not…

I was delighted to learn of an update to QTads, dated this February. But then I downloaded it. In Windows 10 (64-bit), it’s kind of ugly. The text is small and the white-space margins are far too wide. So I figured, okay, I’ll increase the font size to 18 point. This works – except, now the top-bar banner is unreadable, because the text in the banner is too large for the available space.

One of my unanswered questions is whether anybody is entering TADS games in the Comp. But more specifically, what’s up with QTads? Are there other good cross-platform interpreters for T3 games? I don’t even insist on multimedia, I just want text that looks good.

HTML TADS only recalculates font size dependent banner sizes on the next input prompt. So after you changed the font size, the banner will be enlarged when you press enter.

Thanks. I figured that out after I posted the message. But the wide white borders are still a thing.

I’ve just now looked at Gargoyle. It looks nicer than QTads, and of course it’s designed to run a wide variety of types of games. It doesn’t seem to do graphics, however. One of the games I loaded was my own “Lydia’s Heart.” QTads shows the opening graphic (though it’s not centered properly). Gargoyle ignores it.

But the wide white borders are still a thing.

They are configurable. By default, the borders as such that lines of text are not longer than (roughly) 70 characters, which is supposed to help readability. This is configurable in the “Misc” tab in the preferences.

QTads shows the opening graphic (though it’s not centered properly)

Can you post a screenshot? On my end, I’m seeing this: 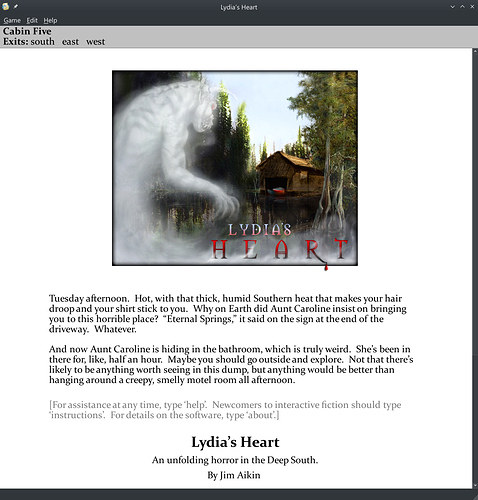 Hi Jim, if it’s of any interest to you, I am also working on a TADS 3 game that I hope to submit to the IFComp. I’ve never used any other IF language, but I really love working with TADS and the screenshots I see of Inform 7 code don’t attract me very much…
Anyway, I plan to enter this game in this year’s comp, but it becomes a question of whether it’ll be ready in time. It’s a pretty large undertaking… it might have to wait for next year’s, but we’ll see…

This is the default appearance when I first load the game into QTads. Once I’ve used Preferences to increase the point size to 18 and the line width to 80 characters, it looks the way yours does. 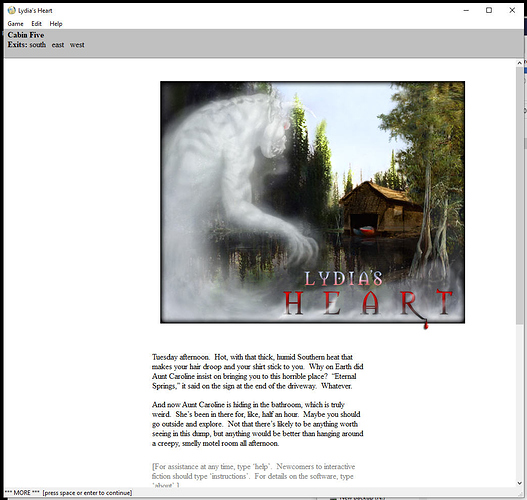 Nobody has mentioned Gargoyle. It’s just a wrapper, apparently, capable of running the engines of a bunch of different types of games, but it seems to work. The download is not exactly friendly: After downloading, the player has to unzip first and then find gargoyle.exe (or its MacOS equivalent) in the long list of goodies.

Are there gotchas with Gargoyle that people should know about?

One thing about IFComp that has changed over the years, is that many judges prefer to play online. Entries that can be played (and look good) in a web browser will get more attention than entries that require a standalone interpreter. If it works on mobile, even more people will see it.

That being said, there are of course also judges who prefer using a standalone interpreter on a desktop machine. Some judges are also very flexible, and willing to spend a lot of effort on getting every game to run. But this is getting increasingly rare (which is quite understandable with 80 entries).

I bring this up because you seem to be in an early phase of your project, and I’ve heard that in TADS, you have to decide early whether to use HTML or not.

Thanks for bringing this up, Linus. It’s certainly something I need to think about.

The first thing I’ll need to research is what server the IFComp games may reside on. I could probably figure out how to host the game on my own website in a special folder, and in fact I ought to do that to test it – but whether the Comp organizers will want the game to be running on an outside server is another question.

It doesn’t appear that a T3 game necessarily has to be set up for the WebUI early in the development process. Based on Eric’s discussion of this topic in the adv3lite docs, that would be advisable only if you’re doing some fiddling around with the screen I/O (such as clearing the screen or putting special stuff in the banner). I could be wrong about that, but that’s what his article seems to be saying. There are also some nonstandard HTML tags in T3, which have to be avoided. Right now I"m using and <.p>, so that might be an issue.

Configuring a game for Web UI is not that complicated, just a few minor changes in code and compiling with Web switch, and if you wanna make the game playable online it can be done via

replacing it with the location of a tads .t3 web file somewhere in www …

Like Jim Aikin, I too prefer TADS 3 over Inform as I feel that TADS is more programmable, but that might be just my inexperience with Inform. I’m writing a game with it now (not competition related). It is indeed disappointing that there is no good way (that is, the way I would like it to work) to get TADS games to run on the web, or as a stand-alone Android app.

I’m aware of the TADS WebUI, but it produces undesirable results on a smartphone screen (though fiddling with all the HTML it generates may fix that). Also, TADS (for web) requires a VPS to set up rather than just shared hosting which not everyone has, and running through gs.tads.io often fails for me (plus I would like to have a less generic loading message).

I think what TADS 3 really needs is:

Unfortunately it seems that no one has so far ported the TADS 3 interpreter, which is indeed a huge job with the complex VM that it has.

If you write to the IFComp organisers and ask for TADS 3 support we might be able to get something working… (I say “we” but I expect it will be me trying to add it to emglken. It would have all the limitations of the Gargoyle Glk version of T3.)

Dannii – It’s not clear how to write to the IFComp organizers. I didn’t see a link on the ifcomp.org page to send messages. That was why I posted my query to the ifcomp section of this forum – and this morning my query hasn’t yet been answered. Do you have any more specific information about how I should proceed?

I didn’t see a link on the ifcomp.org page to send messages.

There’s a “Contact” page under “About” on the web site: https://ifcomp.org/about/contact

Aha! You know why I didn’t see it? Because that top menu bar has a black background with dark gray text. Dreadful page design – looks pretty, but those of us who are old and have tired eyes may not notice the menu items at all.

I guess you can mention that to the organizers when you contact them.