I’m curious. Does the T3 compiler for Mac still work in the new MacOS?

Also, is playing T3 games on Mac still practical? What’s the status of the interpreters?

In the dream-about-it category, about 15 years ago somebody was working on a TADS IDE for MacOS, but the project was abandoned before it ever got finished. (The developer, whose name I’ve forgotten, was not really part of the IF community.) I’m certainly not enough of a programmer to try tackling that challenge myself – but has anybody else considered porting the IDE to MacOS? If I volunteer to throw some money at it, would that be an incentive that would awaken the sleeping giant?

I’m curious. Does the T3 compiler for Mac still work in the new MacOS?

I haven’t tried it on the absolute latest MacOS, but I’ve recently developed TADS on Mac 10.15 and it worked fine.

Also, is playing T3 games on Mac still practical? What’s the status of the interpreters?

Same as above. I’ve been playing and testing with the latest QTads.

has anybody else considered porting the IDE to MacOS? If I volunteer to throw some money at it, would that be an incentive that would awaken the sleeping giant?

Boy, someone willing to spend money to develop an IDE sounds great! I confess, though, I’m pretty happy with my current rig: VS Code w/ @Tomas’ superb vscode-tads3tool extension and some hand-rolled build scripts.

If you were to expend resources on a TADS IDE, I would encourage you to contribute to Tomas’ work, or focus on using a cross-platform UI toolkit a la Electron so it’s not tied to a specific OS.

If you were to expend resources on a TADS IDE, I would encourage you to contribute to Tomas’ work, or focus on using a cross-platform UI toolkit a la Electron so it’s not tied to a specific OS.

The system that Tomas is developing looks very interesting, but as I don’t have a Mac, I’m not in a position to try it out. I raised the question not because I need a MacOS IDE for myself but because I’d like to see more people take advantage of T3 (and specifically of adv3Lite, which is what I use). My suspicion is that for Mac owners, the I7 IDE (which I admire!) is a strong enticement to latch onto Inform, in spite of the various (cough-cough) perplexities with which the I7 author is soon confronted.

I also use T3 on a mac and get great help out of Tomas’ VSCode extension. Same with QTads…

I’d love to try it out, but spending a couple of thousand bucks on a new Mac just for that purpose is not a real high priority for me. Maybe I can borrow a Mac for a few days…

VS Code is cross-platform. It runs on Mac, Linux, and Windows.

Cool – I will definitely give this a try. I’ve downloaded VS Code, but I have no clue how to install Tomas’s extension into it. Do I have to compile something, or can I just download the zip file, unpack it, and grab it from within VS Code?

I’ll install VS Code and research this in more depth later. Right now I’m wrangling my puzzle design into shape in order (finally!) to finish “The Only Possible Prom Dress,” which is the long-awaited (by nobody in particular) sequel to “Not Just an Ordinary Ballerina.”

On the left side of the window there’s an Extensions manager. From there you can search their Marketplace for “tads3tools” and install it from there.

I confess, though, I’m pretty happy with my current rig: VS Code w/ @Tomas’ superb vscode-tads3tool extension and some hand-rolled build scripts

This looks very nice indeed – thanks for the tip! Of course, I’m in Windows, so I have Workbench. I don’t need VS Code. But I can definitely see that it’s superior to a standard text editor. It’s actually preferable to Workbench in that it shows the indentation levels and has zoom. Those of us whose eyesight is failing appreciate zoom!

At some point in the near future I’ll want to talk to Tomas about what he envisions for the project.

Glad you got directions!

You are welcome to write anytime.

The windows version should be mostly at par with the *nix versions and if you install vscode together with frobtads via wsl (windows subsystem for linux) you get the same benefits the linux/mac users has.

The benefits is mostly about the (optional) automatic restarting of the game as soon as you save a document that the project uses. (The standard windows interpreter t3run.exe will lock the game file while running and will thus stop any new compilation to the same file unless you quit the game first. The frob interpreter doesn’t have this limitation and I don’t think qtads has either. )

There might also be more bugs on the windows version due to the way filepaths are handled (specifically insensitivity to casing) and because it is less tested. But feel free to report them in as issues on the github repo or me directly and I’ll do my best to fix them.

I’m curious about what plans you have for this project. The reason I’m asking is because I would like to see a really good IDE for TADS 3 on the Mac. In my opinion, T3 is definitely superior to Inform, especially with the adv3Lite library, which includes a few features that were inspired by Inform. But it has lagged badly in popularity – for several reasons, but one of them is that there has been no IDE for the Mac.

I use Workbench in Windows, and I’m happy with it. The launch panel in the lower left corner, with which I can replay any script (or edit it) is a good feature. Also, the browser pane includes the library files, making it easy to open one when you need to. There’s also a full debugger with breakpoints and step in/out commands, though I seldom use that.

If I had a Mac, I could help with debugging and such things, but I don’t. There’s not much reason for me to use the VS Code editor in Windows, since I’m actively developing my game in Workbench.

I don’t know what features VS Code provides for customizing its own interface to add things like a script replay window. And there may be other features that would be useful, that I’ve never considered because I just keep using Workbench. Can you tell me anything about your plans?

I do all my TADS3 coding on my Macbook (macOS 12.4) with Visual Studio Code and Tomas extension (which is really great I have to say). For testing purposes I normally use X-Tads (X-Tads-Link)

Of course a shiny new IDE for only TADS3 would be a nice thing to have, but honestly I don’t see the benefits over VS Code with Tomas extension.

P.S. Just out of pure curiosity I tried to use the Windows Workbench application via Wine on my Macbook and I worked right out of the box (although I have to admit, that I used Porting Kit to create it) 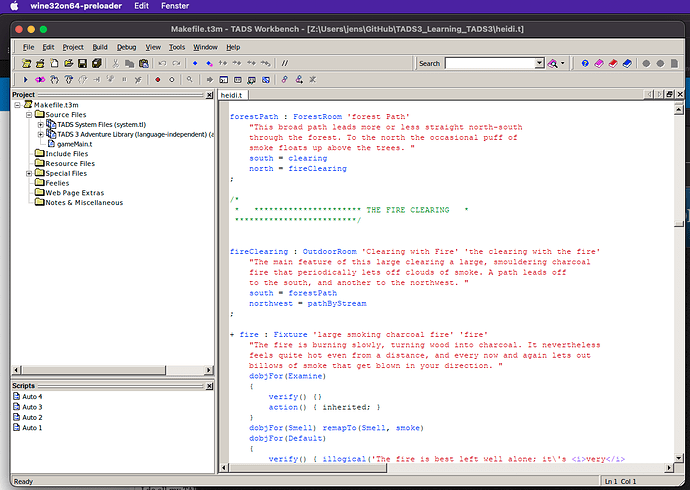 I tried that about ten years ago (when I still had a MacBook). It worked about 99%, but one or two of the dialog boxes didn’t display properly, which made it impossible to change some of the program defaults – they were cut off at the side of the box.

I haven’t tried the VS Code extension. Does it capture the scripts of your gameplay run-throughs and let you re-run the script after changing the code? I use that feature constantly!

This is probably really naive… can Wine run Workbench directly or do you also need a roughly 32GB Windows file on your hard drive as well?

Wine isn’t a VM, it’s a translation layer. So it doesn’t come with an entire Windows installation taking up space on your drive. The install size for CrossOver (a commercial Wine distribution) on macOS is about 300MB (plus whatever Windows apps you choose to install, of course).

I see. My plans for the extension includes:

Since I have full time job and family/other projects/interests (e.g writing interactive fiction) the pace is slow however. And I gladly welcome/encourage contributions to the project from other users as well.

Regarding a great IDE for the mac: I see more benefits in using vsode instead of building a dedicated IDE. My reasons for this is that it is likely to stay updated for a long time, cross-platform and there’s plenty of additional helpful extensions to use. There’s for example built in support for multiple cursors, terminal window, snippets etc… besides it is very customizable.

Adding a script replay window would be fairly easy. I implemented the map editor viewer in the extension using a separate pane you can invoke from a command menu. I think this is an excellent feature request. And I’m definitely up for the task to bring it in to the extension in a future version.

The Wine bottle containing the TADS Workbench and all the necessary windows stuff ist about 750 mb.
Jens

Can somebody please explain to me (maybe in messages or I can give a discord invite) how to install the TADS workbench with wine or Porting Kit, because all this makes me want to try it, and I am having a terrible time making new projects manually.

I like Thomas’ plugin for vs code, I really like vs code, but I can’t even get that to compile, and I’m not sure what I did wrong. I installed frobtads and the plugin, and updated all the paths… I tried TADS when I first discovered IF and did really enjoy it.