Stumped by a problem with Vorple

This is my first time posting on this forum, so hello! I’ve been tinkering with Inform for a while but I only got serious about understanding how it works in the past few weeks. I chose to use Vorple in my most recent project for multimedia integration, and that’s working well. My issue is that Vorple seems to be inserting a line of text into my game that I can’t for the life of me get rid of.

When I release the game and go to play it in my browser, the phrase “Vorple version 3.0 preview” is appended to my starting menu selection (the first thing you see when the game begins). This text does not appear in Inform itself. 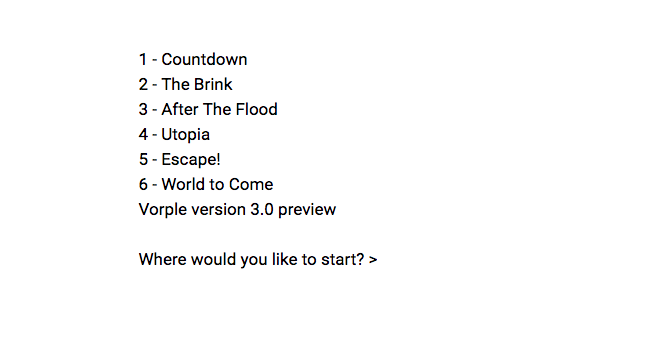 I have no idea how to get rid of it! I’ve tried to look through the Vorple files but I can’t figure out what’s causing it. If you have any suggestions, please pass them along.

If it helps, a section of the code I have for that menu selection is below:

[code]To decide whether picking destination:
if the command prompt is “Where would you like to start? >”, yes;
no.

After reading a command when picking destination:
if the player’s command includes “1”:
now the command prompt is “Listen to the television broadcast? (yes/no)>”;
say “[line break][banner text]”;
say “[helpful instructions]”;
move the player to the Living Room;
now the time of day is 2:13 PM;
now the right hand status line is “[time of day]”;
say “[roman type]You are sitting on the sofa in your living room, watching the news on an old CRT television set. Sunlight streams in through the window. There’s a cup of tea on the coffee table. It is a normal afternoon.[line break][line break] Suddenly, an emergency broadcast interrupts the news.”;
stop the action.

You’re probably trying to search for that exact phrase, so it’s not matching, but my guess is that the version is a variable in the string.

Yup, in Vorple.i7x, we have the following:

So modify that and you should be away to the races.

Thank you! I knew it had to be something simple!