Status Line, a z-machine I created with the delightful Pico-8, is now at v2.0.
This version expands the machine from z3 to z4 game support, adds multi-font display, and more.
While it was written with/for the Pico-8, standalone exe files are available for Windows, macOS, Raspberry Pi, and Linux. Of course, if you own a copy of Pico-8 a .p8 cartridge is also available. Source code for the project is now on github.

For the IF community at large there are a couple of interesting items to note.
With v2.0 of Status Line, I am releasing (and committing myself to maintaining) custom builds of four Infocom z4 games, modified to work on small screens (less than 40-character wide). This includes coming up with a new control/display scheme for AMFV’s “library mode” (for example).

As well, you can read about the challenge of getting the r160 source code of Bureaucracy (the only version we have) to build into a playable, solvable game. Thanks to @heasm66 and @vaporware for their assistance in resurrecting this game. 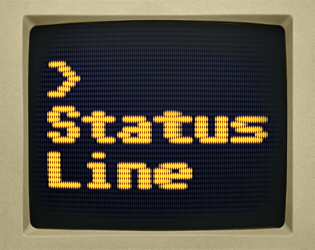 This is very nice. Is there any way (on the developer’s end) to make the scroll happen instantly? I see the fastest-scroll option but it seems like a page-down-like option would be useful.

I am not sure what the limitations of PICO 8 are.

I’m sorry, I don’t quite follow what you mean. “more” is functionally equivalent to page-down, isn’t it? I simply replicate the method all interpreters handle text that exceeds the length of the screen; the methodology is defined that way in the z-machine specification documentation.

Any time you see “more” that is implemented on the engine-side (the part I wrote), and could technically be handled in alternate ways, if I have a clear picture of alternatives that players want.

Any time you see “[hit any key to continue]” that is implemented in the game itself, by the game’s author (perhaps to control story pacing) and can only be controlled by modifying the original game source code. Personally, I probably wouldn’t change things like that, as it alters the game content and original authorial intent.

Page down was probably the wrong term…I just mean that scrolling could be instant instead of “fastest.”

This happens whether you enter a single line command or have a more prompt.

This is just a personal preference, I find the blur effect distracting.

Oh, I see what you mean. Well, in part I was just being true to how the original releases displayed their text; each line dumps to the screen when it is composed to keep memory overhead to a minimum. To do an instant page of text would require some caching and cursor shenanigans that are a little tricky. But if I can figure out a simple way to implement that, I’ll do it.