I remember playing this game decades ago, and loving it! I don’t recall too many details at this point, but as a word lover I found it fantastic (some sections more than others).

I’ve never understood the wordplay in the title, though I’m sure there is some involved. I feel like Nord is such a curious name that it must have some significance, and the fact that Nord, Bert, head (not heads), and tail (not tails) all have 4 letters also may hint at some wordplay. Can anybody explain the joke in the title, please? I would be forever grateful to you for elucidating something that has vexed me for years!

I believe it’s the title of one of the Far Side-esque comics included in the feelies.

I guess you could say you couldn’t make head or tail of the title.

I don’t believe it is in the feelies, actually. In truth, I have always found it baffling, too. But maybe that’s just a consequence of me not getting the game generally. I strongly dislike it. I don’t think that Jimmy Maher examined the title in depth, despite liking the game far more than I do.

I will say that the titles in the feelies are all English idioms, and “couldn’t make head or tail of it” is, too. There may not be a benefit to thinking deeper than that, though I will follow the thread and find out!

… does the box count as a feelie? 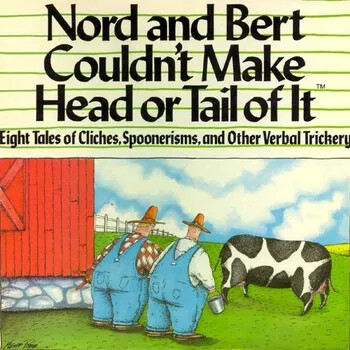 Come to think of it, this just makes the matter worse — this cow clearly has two tails.

Edit: Reading the TV Tropes page for this, it seems like a worse version of Counterfeit Monkey.

In “Shake a Tower”, you visit a stockroom full of pairs of jeans. The back of the jean stock becomes Jack and the Beanstalk, and a man surveying the jeans (a jean client) gets turned into a clean giant, who climbs up the stalk. You meet the giant at the top of the stalk, where he pours a bucket of thick butter down it so you can’t climb as easily. To defeat the giant, you give him your hat, which contains a head louse. Turning it into a lead house, you crush the giant and tie bed sheets (from the beets in his shed) to climb back down. The client isn’t done yet, and shows up once more at the bottom, where you deliver a crushing blow to defeat him for good.

AFAIK, Jeff O’Neill is the only implementor that hasn’t been willing to talk about Infocom to JS or JM. Well, there’s also Tim Anderson, but he was more of a architecture person than a game developer.

So we may never know! There’s nothing in the Invisclues, either, btw

I checked the InvisiClues too, but no luck.
Thanks for the replies!

I actually emailed Jimmy, and he kindly wrote back, but he didn’t have any light to shed on the matter.