Hi all. I’m relearning Inform 6. Ages ago I wrote a LightToDark routine. It doesn’t make sense to me that Inform doesn’t have one.
Anyway, the manual states that after is called for the room being entered. Running with messages on shows this is not the case. Simple enough, I created a class “Room” with after.
But I noticed it called the after routine twice. Not a huge deal, but why does it do that?

As you type a direction command (e.g. “go north”), the action is set to Go, noun is n_obj, and generic before-routines are run, before the action routine (in this case GoSub) is invoked.

(When I say “generic” before-routines, I mean the library calls react_before for all objects in scope, it calls before for the room and noun, and it calls GamePreRoutine. And analogous for generic after-routines.)

This is what it looks like if you print the actions sent to the room: 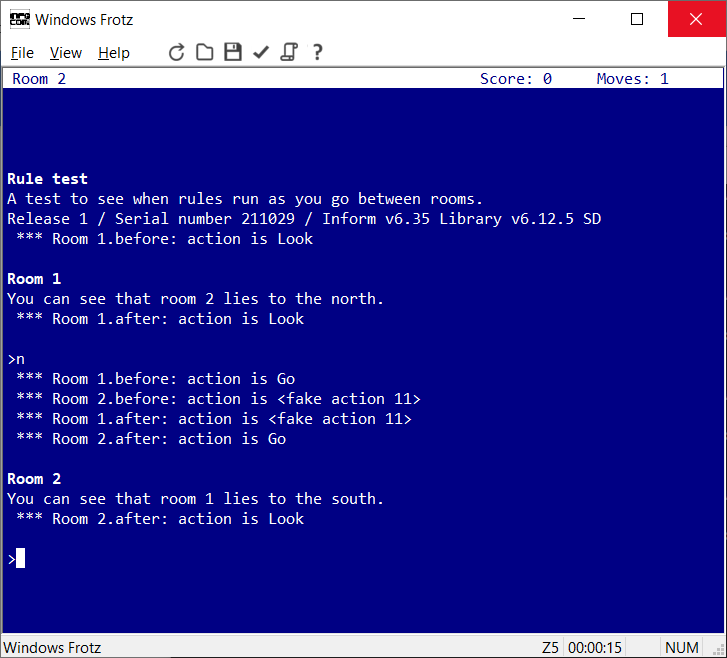 Thanks! That clears up a lot. Unfortunately, I just went into work so I can’t try it yet, but I will soon.

P.S. I should clarify that I’m using the old library because 6.12 hadn’t come out at the time I originally wrote it. (Yes I’m old, and it’s not like riding a bike!)

This may be different in library 6.11

This may be different in library 6.11

This has me confused, since the introducion of ##Going is not mentioned in any of the 6.12.x release notes ( Releases · David Griffith / inform6lib · GitLab ).