Saving the world with a single lightbulb.*

The intro of The Light; Shelby’s Addendum pulled me into the game immediately.
In a rather long passage the protagonist, a certain Shelby is hurrying to get to the scientists in the lighthouse when he is engulfed by an almost tangibly dense fog. Forced to take shelter, he falls asleep in a shed and awakens in the middle of the night. Although frightened, he takes his chances with the dark and the mist, only to find the lighthouse complex abandoned. Or so it seems…

Something went very wrong with the experiment. Up to you to find out what and how to fix it.

There are more long non-interactive passages of text like the intro in the game, like cutscenes and a fighting scene between two NPCs. They are well written and do not slow down the pace of the game. The opposite actually, in my experience. They felt more like rewards after a sequence of tasks done correctly, showing you the fruits of your labour quite eloquently.
The room descriptions are also lengthy and detailed, helping to sustain the dim and gloomy mood in the fog-surrounded lighthouse.

The map is seemingly wide open from the start of the game, with just enough locked doors and hints to other areas to keep it interesting. You can explore every nook and cranny to your hearts content at first. However, as you solve puzzles, you trigger some events that speed up the story significantly and take you to other locations completely, where the pressure to act becomes much higher. (I don’t think there is an actual timer, but it sure feels like it. Good writing!)

The obstacles are never too hard. Most are lock and key-puzzles, opening up new and/or hidden rooms in the complex. Some are mechanical puzzles, figuring out what button does what and getting a machine to work. It’s one of these that pushes up the tempo towards the fast and action-packed endgame.

The story is great if you are willing to let yourself be swept along. In hindsight, there are some gaping holes and improbable situations (No failsafes in a project of this magnitude? Really?). Turn your willing suspension of disbelief up a notch and you’ll be fine.

The NPCs were a tad too distant to my liking. I would have liked to see a deeper exploration of the scientist-gone-mad bad guy. As it was, he was a bit of a caricature.

The Light; Shelby’s Addendum shines through its fast-moving plot and its consistently gloomy atmosphere. Great game!

*The title of my review is a tip of the hat to the excellent walkthrough by David Welbourn. Use it sparingly, the game is not that difficult, but go over the whole thing after you’ve finished the game. The work of a true craftsman.

Thank you for reminding me of this game, which I started playing back when it was released, but never got far into. I will definitely have to finally re-start it.

In fact, looking through my old disks, it seems as if I must have paid the registration fee, as I have this: 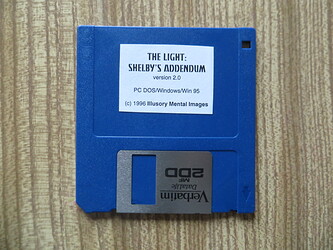 I will have to dig out a 3.5" drive and see if I can hook it up to my current PC to find out what’s on the disk…

And as you write “disks”, plural, maybe there are more gems buried there.

And as you write “disks”, plural, maybe there are more gems buried there.

Searching a bit more, only one other disk relevant to the hobbyist IF world of the 90s: “Lost New York”, which came with a rather nice booklet and postcard. 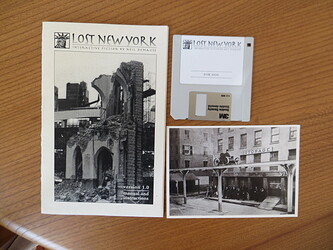 The back of the postcard says “Charles T. Harvey’s trial trip on the first elevated railway. Greenwich Street, New York, 1862.”

So cool. And you have returned the favour. You reminded me that I have yet to play Lost New York. I started it about a year ago and then … got lost and quit.

Well the Shelby’s Addendum disk didn’t turn out to be very interesting, just an older version 2.0 of the game. I’ve put it on ifarchive.org anyway, in games/tads/old/.

I’ve just got round to finishing this game. It’s only taken 26 years, but I really enjoyed that!

Did you play it from the disk or from a download?

I just thought you might have dug up a decennia-old piece of hardware to play the disk. For nostalgic reasons.

I have to admit that I don’t get nostalgic about old PCs. Having been there at the time means that I have little desire to go back to the world of MS-DOS, with endless faffing with AUTOEXEC.BAT and CONFIG.SYS just to get anything to run …

A little bit more about Lost New York: I contacted Neil deMause, the game’s author, and got permission to upload a scan of the booklet that came with the registered version to IFArchive (it’s now at https://ifarchive.org/if-archive/games/tads/lostny.pdf).

Very cool! And so The Archive grows…

One last thing for Lost New York: Neil deMause has agreed to making the registration file available that unlocks the built-in hint system for the game. It’s now with the game file in the IF-Archive.

Good to know. I’m sure that will come in handy when I get around to playing LNY.