I came across this multimedia IF game called “Descent” on Itch-io. This is a captivating short game that does several things well. 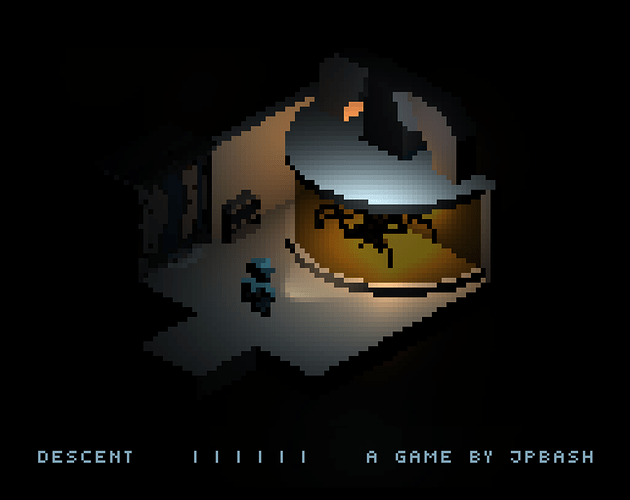 Explore the abandoned vessel VALIS XI and piece together the secrets of the crew's disappearance.

First, you don’t have any action buttons: you only have movement buttons. Progression simply involves moving around a space station. Text boxes tell you where to go. You are running away from a monster, but it can’t actually do anything to you!

This sounds very boring, but it’s actually fairly involved, and that’s largely down to the game’s visual style.

The game uses ultra-low resolution pixel art and a 3D isometric map. This means that you can’t just look at things and tell what they are; nor can you just guess where you need to go. Instead you are searching every corner…except the game gives you enough information that the search is perfectly intuitive

For example, at one point you have to go to a secret room “across from a vending machine,” which would be ridiculous in a high-definition AAA game. But in this game, that simple instruction involves piecing together two pieces of information, even though the game doesn’t actually have any moving parts that make up that puzzle.

I think it is safe to say the game is borrowing from the recent trend of Bitsy 3D games, even though it isn’t actually using that engine.

On one hand, it is funny to see a full-fleged Unity game that is trying to look like a very advanced Bitsy game. On the other, the simple style also plays into the game’s mechanics very well as described above. The low-definition style also highlights the game’s lighting effects, which are appealing but not terribly original.

I am a sucker for space horror and this game hits all the right notes. The ending (a looping plot around identity) has obviously been done before…the plot of the film Solaris comes to mind, though this is a bit different. Ultimately the trope works well for a small game like this.

Descent takes about 20 minutes to play through and is definitely worth a look. I hesitate to list it on IFDB because it is closer to a graphical adventure than IF (regardless of its Itch-io category). In any case it is very good.