Restoring a game written in Basic

My mind went a-wandering and I realized that I could dimly remember the first text adventure I’d ever played, a game typed in to an Apple II from a magazine listing.

It occurred to me that the game featured a dragon and a McRib sandwich, and that it would therefore be possible to Google for it.

I believe I have in fact tracked it down in an archived issue of Softline magazine. The game is called The Horrible Rotten Dancing Dragon…Strikes!!! The article appears on page 22. (Google technically pointed me to a bug report in the subsequent issue on page 6.)

Googling for “horrible rotten dancing dragon” turns up nothing more than links to the Softline article, and, bizarrely, a walkthrough and a map from 2010.

(I promise this game is real, and was really, truly written in 1983. I am not pulling a Veeder on you.)

I wonder if y’all have suggestions on how I might best get this game up and running again.

The article including the code for THRDDS is the last in an eight-part series by Ken Rose explaining how to develop an adventure game from scratch, and all of those articles except this last one were implemented in Applesoft Basic. Randomly, Rose decided to implement this version in Atari Basic, which is extremely unfortunate, because the whole program won’t even fit in the Atari’s 16KB of RAM.

(Softline featured some angry letters from Atari owners in the subsequent issue, though Softline claimed that it would work if you didn’t load Atari DOS. “Sounds like you both had the disk operating system loaded. On the Atari 400 you need all 16K, free and ready.”)

The instructions include hints on how to port the provided Atari Basic code to Applesoft Basic. It looks straightforward, and as little as I know about how to run Applesoft Basic on a modern machine, I know even less about running Atari Basic.

The top Google result for “apple ii emulator for macOS” turns up http://www.virtualii.com/ which appears to be down.

I also found this Apple II emulator in JavaScript, which looks pretty interesting, and even includes various disk images, including a passable port of Don Woods Adventure and a number of Infocom classics, but I couldn’t figure out how to run Applesoft Basic on it.

But, even better, I’ve found an Applesoft Basic emulator written in JavaScript, which seems like an optimal place to start. It even includes a sample game, Uncle Tays’ House Adventure by Floyd McWilliams.

So, I guess I’m going to take the code from the Softline article, type it in, and paste it into this Basic emulator to see if I can get it to work.

Is there a better approach?

EDIT: I typed it in. https://ifdb.tads.org/viewgame?id=2bavj7k3yeckppxj

I also found this Apple II emulator in JavaScript, which looks pretty interesting, and even includes various disk images, including a passable port of Don Woods Adventure and a number of Infocom classics, but I couldn’t figure out how to run Applesoft Basic on it.

Press the little cog button to bring up the Options window, and make sure it’s set to emulate the Apple ][+. If you had to change the machine being emulated, reload the page. Once the system boots and you see the “APPLE ][” text at the top of the screen, you can press the RESET button on the keyboard to get to Applesoft Basic.

Ideally you’d be able to boot from the “Blank DOS 3.3” or “Blank ProDOS” disks and get to Applesoft with the ability to save your program to disk(-image), but either the emulator or the disk-images appear to be broken.

That said, the Applesoft Basic emulator that lets you write in an external editor and paste the result in is going to be a lot more pleasant than writing BASIC directly on an Apple II would be, even an emulated one.

turns up http://www.virtualii.com/ which appears to be down.

Looks live to me. But you have to pay for full use.

I used to use Catakig, but that hasn’t been updated for 64-bit MacOS. Phooey.

With either of these emulators, you’re running a proper emulated Apple II which will make your task as easy as possible.

Put it in a floppy drive in the emulator. Turn on emulator. Wait for it to boot to cursor. Type NEW and press RETURN. Now you’re ready to type a game in from the magazine, or to dump what you typed in some other text editor from the clipboard. To save your progress, you can type SAVE (FILENAME) any time. Use LOAD (FILENAME) to bring it up next time you boot, or to reload a previous version.

PM me if you want any more tips. Btw, I tried to find a copy of the game in a certain Apple II software archive, but if it’s there, it’s not under DRAGON, HORRIBLE, ROTTEN or SOFTLINE, and is thus not readily findable.

Googling for “horrible rotten dancing dragon” turns up nothing more than links to the Softline article, and, bizarrely, a walkthrough and a map from 2010.

I’d hold fire on typing it in before you check with Warrigal who is on here, and was the one who wrote that walkthrough… he might be able to help you locate the game.

I’m guessing that Garry played the Atari version; so retyping the game might be unavoidable if you want to play it on the Apple II.

on apple ][, there are also Linapple/winapple, whose are 100% free and working well (winapple ended being one of the very few windoze software authorized to run on this Linux box under wine) and there’s also KEGS, emulating IIgs (but with some output issues in Linux native mode and wine, but is a good, quasi excellent emulation)

Now, having both apple ][ basic AND Zarf… what about releasing the original Inhumane ?

(Someone added a “crack screen”, though.)

Well, I did it. This game isn’t very good, but I have fond memories of playing it with my dad. 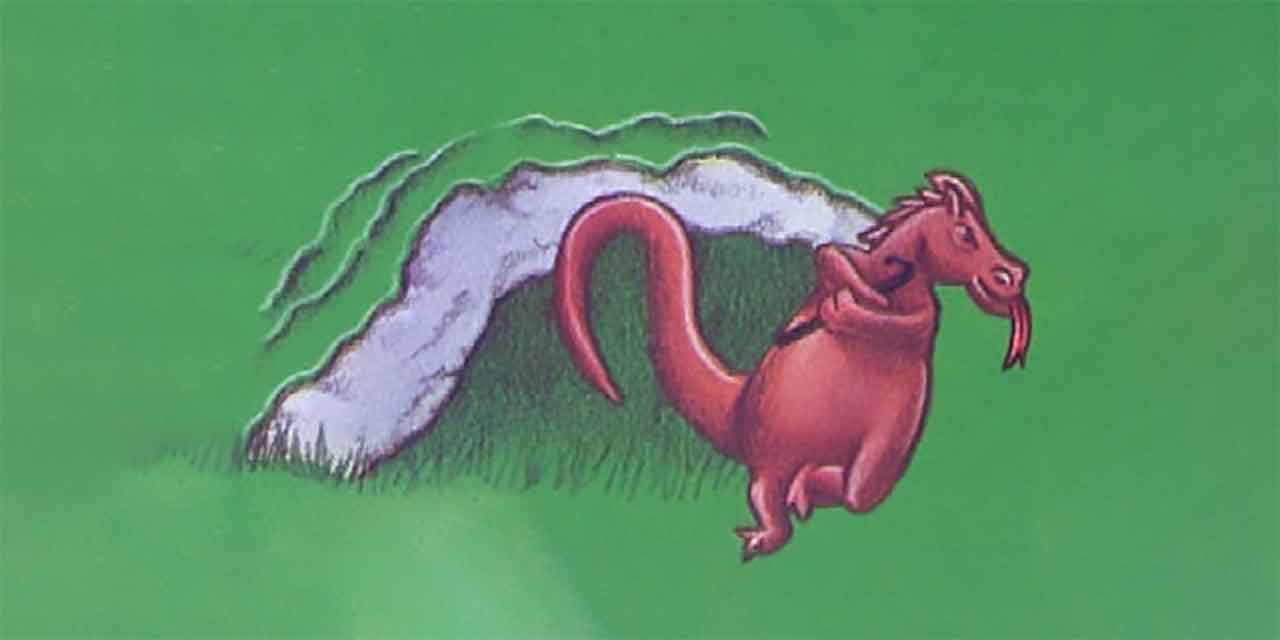 "The Horrible Rotten Dancing Dragon…Strikes!" A game in BASIC published in Softline magazine in 1983. - dfabulich/horrible-rotten-dancing-dragon-strikes

Is there a good way to turn this into a one-click playable game online? Currently the instructions I provided say to “copy and paste the code into the JS BASIC interpreter” which is a bit of a hassle.

Here’s a quick (and possibly buggy!) hack of the listing to convert it to BBC BASIC, playable online:

Just played it through to completion and it seems to work fine – thanks @dfabulich for tracking it down and typing it in, and @ahope1 for hacking together the play-online option!