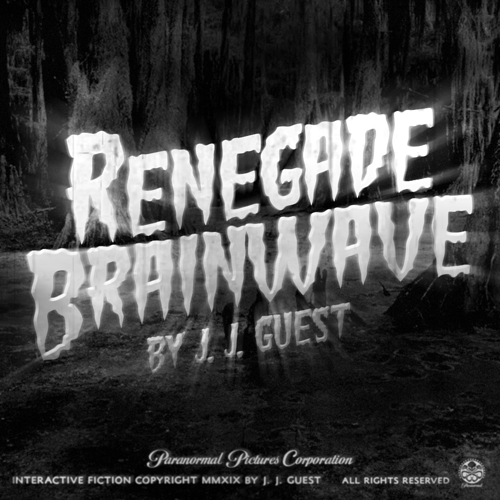 "Beware! Beware! Take care! For you are about take part in an interactive story that will reveal the terrifying truth behind the mysterious Soviet space programme! Revelations of incredible horrors that will terrify you with their brutal reality!

For this is the story of a mysterious force — a force that has crossed the billion mile vastness of infinite space! Boneless, fleshless, almost invisible and yet imbued with incredible power — I speak to you of cosmic radiation!

The deadly solar radiation that has the power to raise the dead! The power to amplify brainwaves to many times their natural strength — so that even a weak little puppy could wipe out a city of concrete and steel — with the power of her mind!

In a future that grows ever closer, the fate of the Earth lies in the hands of one man. That man is Detective Frank Douglas — that man, my friend, is YOU!

God help us… in the future!"

I made the soundscape as an exercise in teaching myself Adobe Audition. It features music by Monstrous Movie Music, who specialize in recreating previously unavailable classic film music from the 1940s - 1970s. The sound effects in the soundscape are also sourced from the golden age of Hollywood. A film-maker called Craig Smith has painstakingly digitized more than a thousand optical sound effect recorded from the 1930s - 1950s, and made them available on Freesound. At present, the soundtrack is only available on the download version, but I hope to have it working in a browser before long.

Renegade Brainwave was written in tandem with Alias 'The Magpie’ and finished over the past year. It is a love letter to the films of Ed Wood, Phil Tucker, Ray Dennis Steckler et al, and was a lot of fun to make. I hope you have as much fun playing it! You can find it on my blog site, and on the IFDB. Reviews are welcome and encouraged!

Renegade Brainwave can now be played online complete with the atmospheric soundscape. Many thanks to Mathbrush for providing me with the necessary javascript.

Simply type “music” or “sound” to toggle the soundscape on or off.

The soundscape really does a lot for the ambiance. It didn’t feel overly repetitive and annoying which I find game music often does.

Despite all those quibbles* I really loved this game.

If you haven’t yet, check it out. And turn on the sound!

Thank you Nils! That’s some great feedback, and I’ll definitely implement those small improvements including the doughnut idea, because that lack of symmetry bugs me, too!

I finally got around to playing this bite-sized parser game. This is a fun genre send-up, competently put together. The setting is brilliant, and the puzzles are varied and possible to solve without hints. Highly recommended!

At one point I had to restore a saved game after I had accidentally given the sweater to Lobo. Is there a way out of this situation?

Is there a way out of this situation?

Thanks for playing, Linus, I’m really glad you enjoyed it!