Playing Zork (and anything else) old-school

I’ve played IF using Zoom, Frotz for iPhone, and some online interpreter, but it’s time I learned to play them the way they used to be played (sort of).

I’m 22, and the computer I used to play Cuckoo Zoo on as a little kid has now become my experimental FreeBSD box. It does not connect to Internet and for various reasons may never. It has a 133MHz processor, a 1 GB HD, and 96 MB RAM. It has no USB port. It has a tape drive (but probably no tapes), a floppy drive (I do have floppies), and a CD-ROM drive (does not read DVDs). There is no GUI. I’m guessing Zoom is out. I particularly want to play Zork. What can I do to make this happen? I don’t really want to spend more than $30 on eBay or wherever for a pet project.

133MHz sounds like a Pentium 1, which means PCI. So get a PCI network card. They’re very cheap, even buying a new one goes for about 10 to 15 Dollars or Euro. Make sure FreeBSD has a driver for it.

You can actually run a GUI on 96MB RAM; try XFCE. Then you can try Gargoyle or Zoom in it. But since you said you want to play them the original way, then use a text-mode interpreter and play them on the 80x25 console. That’s pretty much the original experience.

I’m specifically avoiding the GUI; I will not load one onto this machine. I don’t suppose the floppy disc images for Zork are available for Unix machines somewhere…?

“Floppy disk images for Zork” were never for Unix. You could find an Apple 2 disk image, or a DOS disk image, and run that in an emulator.

However, the easiest path is to find the z-code file for Zork 1. (An old Infocom CD off ebay, or, um, about thirty seconds searching the Internet.) Also the Frotz source code for Unix: ifarchive.org/if-archive/infocom … .43.tar.gz

Then move those files over to the machine. (I’m not sure how you’re doing that, but a CD-R will work, if you don’t have the thing on your local network.) Compile Frotz and run it. By default Frotz will build with a terminal-window interface.

I’m not sure if that’s what you want, but there are several Zork games for sale on GOG (www.gog.com). They run in dosbox, but I’m not sure if you’d be able get them working in any other way if you wanted.

“Floppy disk images for Zork” were never for Unix.

I was curious what media the briefly-sold Zork for PDP-10 used (8 inch floppy), but looks like that machine ran ITS and not a unix. For period flavour perhaps the OP could compile the Fortran version of Dungeon?

For a machine like that, Unix Frotz works well, is very lightweight, and requires no extra libraries I made sure that it would work with the standard NetBSD curses library. It should be good for FreeBSD’s curses. Of course, ncurses can be used if you have that installed. You don’t have to resort to the dumb interface.

It should be good for FreeBSD’s curses. Of course, ncurses can be used if you have that installed.

Actually, FreeBSD’s curses is ncurses (configured to use a hashed database). The port adds some functionality for terminfo, but most applications would be unaffected.

I was under the impression that ncurses was GPL and therefore could not be folded into a BSD project. A closer look tells me it’s under some “permissive” license that vagely resembles the BSD license. Are you the Thomas Dickey involved with ncurses?

And there it is. Thanks!

Thanks, everyone, for the responses! I have every intention of trying some of this stuff in the next week and posting whether anything worked properly.

In case anyone is interested, this is how the whole thing turned out: rae-bot.blogspot.com/2012/09/the … z-and.html

Not sure how you would get binary disk images for Unix onto this box (or where you would even find them) but I seem to recall that Activision eventually released the original Zork games under some kind of non-commercial license and the .Z5 files are available legally for free on IFDB and elsewhere. So if you can get an interpreter going that seems like the easiest route.

They put them up on a web site they owned. Later, they took them down. I don’t recall there was any kind of explicit license at all.

the .Z5 files are available legally for free on IFDB

IFDB doesn’t host games, it links to games. For Zork 1-3, it links to files on infocom-if.org/. Whether those files are there with permission, I’ve never seen anybody say for sure. (But I’m pretty sure nobody cares. It’s hardly the only place on the Net you can get them.)

I have a weak spot for Enchanter, which I played way back when. Perhaps now is the time for me to play the rest of that trilogy! I’m sort of thinking of doing an alternating play schedule of the classics, one from the 80s, one from the enthusiast age, until I’m caught up on a few of those games people speak so highly of.

I’m glad you figured out something awesome on your FreeBSD “IF gaming console”!

It’s not old-school enough unless you play zcode games on an Atari ST! 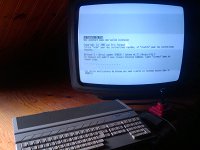 The ST is clearly an awesome IF platform. My first taste was on Apple IIs, personally.