OK, but it’s 53378 with your latest changes. Also here’s a ZILF patch to do the pre-action thing by setting COMPACT-PREACTIONS?

You’ll have to bring up ZILF changes with Jesse McGrew. If nothing else, it would be nice if ZILF generated as good abbreviations as you, but from what I understand even the development version of ZILF doesn’t do that yet.

Anyway, I’m now down to 54,164 bytes with standard ZILF 0.9 abbreviations. (Approximately, because apparently ZILF doesn’t always generate the same set of abbreviations on consecutive runs?) With the one you generated above, I get 53,498 bytes, but the word “Adventurer” is less common now than it was before so regenerating it (I really should learn how to do that myself) may shave off a few more bytes.

If you’re down to 53498 bytes, is it time to build a C64 program? If I get a pointer to the file, I’ll build it. It can’t be built with Ozmoo Online, and it requires a tiny bit of knowledge of the make script to build locally.

Of course I had to build my own abbreviation engine to see if I could improve it. It bugged me that there was a difference of ~300 bytes between ZILF beta and the best version. I think I found a couple of errors in ZILFs and a way to improve it. I write more about it in the other thread.

Here is a abbreviation file I generated with my new engine that makes the latest (release 8) of Mini-Zork II 53,444 bytes.

I think I found a couple of errors in ZILFs and a way to improve it. I write more about it in the other thread.

I’m looking forward to it. I never did manage to figure out how to generate those better abbreviations myself. As you said, Ozmoo Online still thinks the file is too large, so I haven’t tried building a C64 program either.

Here’s a first playable version for the Commodore 64: 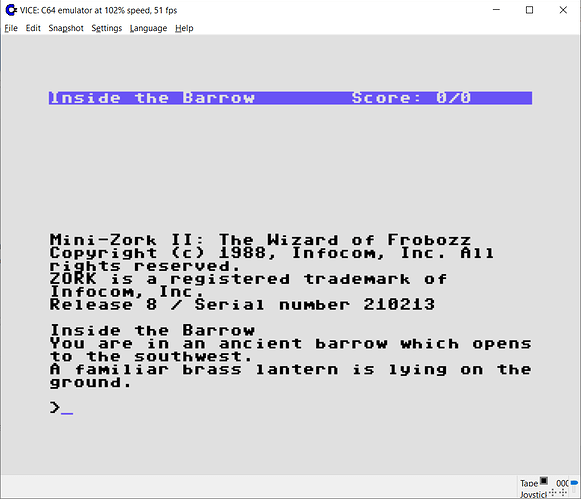 Here’s a first playable version for the Commodore 64:

I’ve fixed so that “EXAMINE ALL” no longer finds all sorts of global objects. I don’t know if it’s enough to warrant a rebuild, though. (I didn’t bother changing the Revision number.)

I vaguely remember reading a review of Mini-Zork I many years ago. The only thing that stands out in my memory is the reviewer saying how strange it was to play and Infocom game on a C64 and have it respond to your commands almost immediately. After trying this one for a few moves, I think I can see his point!

Anyway, feel free to report any bugs you find. I can’t promise I’ll fix them (particularly not if they’re in the parser!) but I can certainly give it a try. Hopefully without increasing the size of the game too badly.

I compiled the new version, so it’s up to @fredrik to put it in Ozmoo…

I have a feeling there may be quite a few bugs left. This game was probably never exposed to Infocom’s legendary testers.

Now everyone can be the “Dornbeast”…

I have a feeling there may be quite a few bugs left.

No doubt. The game wasn’t even completable. Even if the interpreter survived the Frotz-crashing bug when leaving the Carousel Room, I don’t think there was any way to get the balloon off the ground.

And actually, that particular bug is present in the last preserved versions of Zork as well.

I think I’ve fixed it, and also made it understand “DRINK FROM STREAM” just because. Unfortunately the latter increased the size of the game file a tiny bit. Hopefully not fatally so, but I’ll see what I can do to bring it down again.

I’ve started testing the game a bit more properly (still a long way to go), but I decided this was enough little fixes to call it Release 9. The file I built now was 54,064 bytes, which means it’s still getting smaller.

As usual, I’ll leave creating optimized abbreviations and a C64 version as an exercise for the reader.

I’ve made a abbrev-file that compiles release 9 down to 53,348 bytes. The abbrev-file and the z3-file are here.

If information from @fredrik is correct the file needs to be 52,224 bytes to be able to compile it in Ozmoo Online…

@vaporware is thinking about including some of our efforts here in the next Zilf version:

I have updated the d64 file at Minizork 2 - Google Drive

Also note that anyone can download Ozmoo and run it on their own computer. The bat file in the Drive folder above shows what you need to do to build Mini-Zork II the way I built it.

I just realized that I had introduced a nasty bug in the last version (it was possible to give your hands to the lizard, among other things), so after fixing that I decided to update the revision number to 10.

This means that some of the code I removed in an effort to save space had to be put back again. But it should still be small enough, I guess.

Updated the .d64 file on Drive as well.