I’ve been trying to remember the name of a game I played years ago, and that I’d like to replay.

In this game, you were the villain: it begins with you sending the hero to be incarcerated (or executed, I’m not sure). But he promptly escaped and went after you. The meat of the game consisted in rearranging the rooms that the hero needs to traverse to reach you, so that he dies before doing so. Each time you selected a particular permutation of the rooms, the game “played it out” and it ended on either you or the hero dying (most frequently the former). If you died, you had the chance to try again.

The game was short and small: it consisted solely of this puzzle. By any chance, do any of you know it and remember its name? 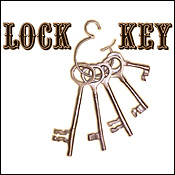 Thanks, that was it!

WOW. I’ve heard of Lock & Key before, but never played it. I just saw the cover art here and realized how similar my cover is for the Locked Door games. The font is even the same! I’m sure some people probably thought I did that on purpose, but in reality I just grabbed a font I used to use a lot for concert flyers and threw in a key because that’s what the game is about. I did throw some intentional references to other IF in that game, but this was not one of them. Too funny.

I’ve just finished it! I’m surprised at all the things I remembered wrong in my initial description