My project is named Castle Macbeth. Despite the Shakespearean title, it is loosely based on the play Macbeth. I love that play, will always love it. However, I am doing a more modern based spin. If you read my inquiring of implementing a ZIL block for a custom status line, in case you are wondering, I actually got this inspiration from playing Sierra Online parser based graphic adventures (AGI) such as King’s Quest I-III. I am more for the scoring then the moves status read out. If anything the moves will be followed along with the SCORE command detail. It’s convenient for games that you challenge yourself on reading out moves to see if you can do the least amount of moves from the last completed game (ie Zork or Planetfall) as much as possible to get the highest score (which is like kudos and akin to an arcade game for the score board but just epic, but also always replay-ability, so stuff it you next gen console fanboys for saying my gen’s games suck for ZERO REPLAY-ABILITY on Zork

). But not necessarily to transcend the idea of using moves branching to scores, but I am wanting to supplement my scoring system with what I call the DICK MOVES BONUS SCORING.

Due to the title of the bonuses, there is no doubt Jack-assery type mischief to be afoot in this project if I do undertake such an endeavor. I was thinking, anyone got a suggestion if I should or should not add the DICK MOVES BONUS SCORING to my status, and what is the best DICK MOVES BONUS stunts I should pull? If I am to choose to so add the BONUS, it will take the status of DICK MOVES instead of MOVES/TURNS status, and act as more of glorified additional scoring status rather then a turn counter. So I might either choose to not as part of the SCORE cap for the DICK MOVES, but it be it’s own individual counter. I am thinking adding a rank in it due to the moves. Such as if you get the max score and max BONUS, you will be given AN ABSOLUTE PRIVATE EYE DICK… Or if you just want to replay it to be a total dick, you are like GOD LEVEL DICK, or PURE DEUCHE. There’s also a demotion of your dick status if you below a number BONUS, like a read out of “you are demoted to a Regular Asshole,” or if you do something failing of the Regular Asshole you are demoted to Card Carrying Member of the Jackass Club™, most likely due to you doing something stupid to demote you, which is another idea I have undertook… So there is possibility that if you fail at the BONUS, you will get demoted from just Standard Private Eye Dick.

So far the story is such, you are at castle, that is pretty much akin to a manor. You meet up with the goofy King Macbeth, telling you that his wife has murdered him and you must solve the mystery to it. And of course Queen Macbeth is a sultry seductress (akin to your YOLO party chicks), and the main character is named Jerr “Muy Caliente” Harden Rodriguez, Private Dick Eye, who’s automatic skills to be programmed into the project (primarily useless, but can be used for BONUSES if done adeptly and skillfully, or low skill, since this is a standard outta the box ZIL/F source) when INTRODUCING YOURSELF (would be of course MYSELF in game) TO the butler, the King and Queen, etc, which are the ability to speak Germanglish and Speutch (both splices of the languages of German-Spanish and Spanish-Deutsch/German) and has the ability To Say What He Thinks Women Want to Hear. Of course reading this he is a veritable natural a being a deuche (also he is loosely based off of me, due that I used my name, minus the final surname,due that I am by no means latino, but gives it a certain dynamic). I kinda got the name from Family Guy from the Peterotica episode.

So what do you guys think?

also the Jerr “Muy Caliente” Harden Rodriguez is also a play on the Carlos Spicy Wiener name that Peter took as a call sign on Something Something Dark Side Family Guy movie.

So far the WIP… So far so good… Might reconsider the score cap portion of the SCORE zone of the status line. 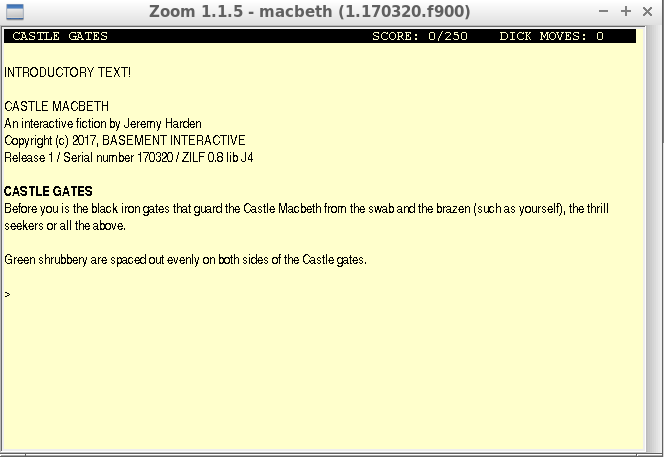 And BOY do I need to proofread my grammar!

“Before is the iron gates…” The Lizzy HALE did come up with using “is” in that fiasco of a introductory for my room! >:( Well it’s not a final release for publishing in my defense… Still…