More (or Less) about the WebUI

The demo from Otto73 (the link is in a thread a little further down in the forum) convinced me to have a try at compiling for the WebUI. I attempted to follow faithfully the instructions in the doc. I’m using adv3Lite and Workbench (the most recent versions of everything, I’m pretty sure).

My experience was not good.

After editing the .t3m as instructed, in Notepad++ while Workbench was not open, I launched Workbench and did a full recompile for debugging. All appeared to go well until I typed a command in HTML TADS. (The command was a gonear – that probably isn’t significant, but it might be.) At that point, HTML TADS crashed.

It now crashes consistently when attempting to load that game file. I get a few error message boxes. They look like this: 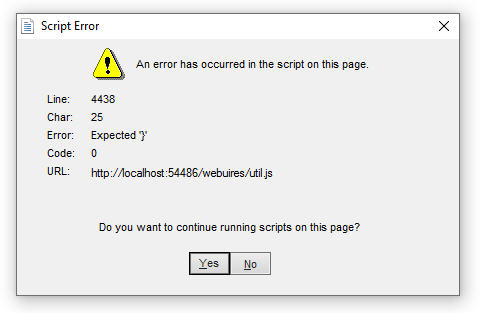 Not being able to work in HTML TADS while developing the game would make life difficult. But there’s more.

I next used Workbench to do a Build Web Page Package. This produced a set of files, including a .t3 and an index.htm. But index.htm turns out to be just a stub of an ifdb listing page. It’s not a file that can run the .t3. Nor is there a .css file that can be edited to alter the appearance of the game.

It appears the virtual server is some other piece of software that I don’t have. So where is it? What is it? How can I check what my game looks like when played in a browser, when Workbench doesn’t create anything that will run the game in a browser? I’m mystified.

Comparing this workflow experience to Twine is revealing. In Twine, when you press the Play button, your default browser opens up with the game already running. (Well, Twine doesn’t actually produce games, it produces stories, though Twine users call them games. But that’s a rant for another time.)

I’d love to be able to use T3 to produce a game that will play in a web browser. And I’m not a dummy – I can even write simple javascript if I need to. But at minimum, I would need a set of clear instructions on how to write my T3 code, coupled with a compiler that produced a browser-ready set of files (including a .css file, obviously).

This is probably sounding like a rant, but it isn’t. It’s a plaintive cry of distress. Am I to be forced to resort to I7 with Vorple? I hope not, but it’s looking rather likely at the moment.

@Otto73’s otherwise excellent manual does not provide enough information on converting your project to a WebUI project. Take a look at the TADS documentation. Among other things, you must switch from adv3 to adv3web and I suspect that that is the problem.

For your reference, here is the pertinent passage from the documentation:

To port an existing game based on the traditional console user interface (including HTML TADS games), the first step is to switch to the Web UI libraries. This requires a few changes to your project’s .t3m file.

Here’s the procedure to update your .t3m file to use the Web UI:

As for CSS files, as soon as you’ve converted your project you’ll find an automatically included folder that contains a bunch of CSS and HTML files. You can edit these directly (but your edits would apply to all future TADS web project) or create your own files in a custom webuires folder to override the provided CSS.

That’s definitely not the problem. As I noted (or thought I did – maybe I was vague) in my original post, I edited the .t3m file precisely as instructed in that passage.

I created a folder called web directly in Documents as a destination for the web release package. That folder now contains: a zip file that contains only the _rls.t3 file; index.htm (which is the dummy ifdb page); porticon.gif; and storyweb.css. There’s nothing that can actually run the game in a Web browser.

This is a different folder from the one where the project itself lives. The project folder also contains a folder called web – but that’s empty. Nothing there at all.

Thought I found the problem there, but I didn’t. Sorry! Maybe you could use the workbench to create a new web project, then put your *.t files in there. That procedure should do all the work for you, and it should work. I actually followed the WebUI instructions some days ago and it worked well for me.

Then, open a browser and navigate the browser to localhost. If there is an index.html file in the root directory it will automatically open that file. If not you will have a selection of folders to select from.

The web server virtual environment can also be installed on your local Windows computer but it is more cumbersome than installing on linux.

This may be a solution is has not already been tried. Sorry if it is too fundamental.

PS. TADS is my preferred development system. I have placed it on the back burner due to fiddly publishing issues and lack of current development. Unfortunately, I don’t have the programming skills to help develop a solution.

I installed a localhost this morning in order to run a Vorple Inform test game. That works, so I know the localhost is okay. I copied the stuff created by Workbench (as listed above) to a subfolder in the localhost’s html folder – but when I navigate to that index.htm file in that location, it’s STILL just an ifdb stub page, not something that can run the game. So what am I doing wrong?

I just completed a very simple game after selecting the adv3lite WebUI with the new project workbench IDE.

I compiled all. When I go to the webui package, it opens to an IFDB type page. When I select the download option from there, and then unzip, it opens the game in an HTML Tads Interpreter.

Beyond that, I can’t help at this point. It has been a couple of years… I will continue to work with options. Maybe someone else can provide further guidance more quickly.

As far as I know, not having written any HTML Tads, the writing of the T3 code only has minor differences with WebUI, if you’re using workbench. But you still need an interpreter to run the game, even if it’s WebUI - is that the part that wasn’t clear? I don’t think the ‘Build Web Page Package’ is the option you want. There are basically three ways I’ve found to run a WebUI game, in increasing order of complexity:

Hope some of that helps! As far as workflow is concerned though, it’s not ideal - if I want to debug the actual TADS code, I do it locally as I’d be lost without the Workbench debugger, but to check whether my html/css/js is ok in a modern broswer, I need to upload it and run it through the ‘http://gs.tads.io/?storyfile=XXXX’ address.

Here’s an example of a game I wrote with WebUI, running through gs.tads.io:

You can just use the address ‘http://gs.tads.io/?storyfile=XXXX’, with XXXX being the address where the .t3 game file is hosted (e.g. http://mywebsite/games/mygame.t3).

That may be the key piece of the puzzle. I’ll give it a try. Thanks!

Hope some of that helps! As far as workflow is concerned though, it’s not ideal - if I want to debug the actual TADS code, I do it locally as I’d be lost without the Workbench debugger, but to check whether my html/css/js is ok in a modern broswer, I need to upload it…

Exactly. I have now verified that it works! Break out the champagne! The appearance is still bog-standard, and I have no idea how to add styles, but even if that proves awkward, IFComp judges can still play the silly thing in their browser, and that’s what matters.

As long as I’m careful not to use any coding that conflicts with standard html, I should be able to write the whole game in standard adv3Lite and then port it over after it’s tested and debugged.

Obviously I’m a little late to the party, but for what it’s worth, you can get the address of the local server the TADS workbench (or interpreter) starts when you debug or run a WebUI game. I’ve been using this code in my game to get it, which I can then have the game output, and I can then copy it into a real browser.

It seems to work ok in Chrome, although it has been crashing in Firefox.