Inspired by the Brimbank Writers and Readers Festival, which is running an Interactive Fiction Panel this year (and foolishly inviting me to join in), I’ve convinced my “Choices: And The Sun Went Out” Tin Man Games co-writer Alyce to come, and shall do my best to draw in more interactive fiction writers, because why not?

There’s bound to be a food venue of some kind (I shall consult my Melbourne associates if no one here speaks up) we can invade en masse for an afternoon on Saturday or Sunday.

I will absolutely dress for the occasion (probably steampunk, possible pirate) and I’m generally difficult to miss. 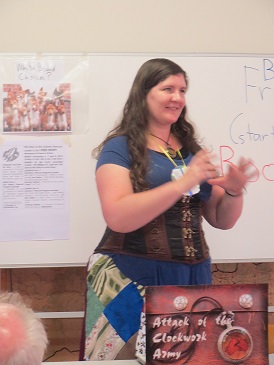 PS I’ll also be running an IF workshop focusing on ChoiceScript/Tin Man Games stuff in late September in Canberra, if that’s to anyone’s taste.

Ooooh. I don’t know whether I can make it this year but I’d love to. Which weekend in September is it (or is it not settled yet)?

Emerald’s indication that she would potentially hoik herself across the country for this inspires me to think that I should consider hoiking myself across one state.

I won’t be able to, but if you’re ever in Brissie give me a call!

I shall be hoiking myself over from a small town called Canberra.

The date and time just got real:

I reckon we’ll pick a cafe nearby and meet at 3:30 until whenever. (That way people can stay longer if they’re having fun, but no one gets stuck between two strangers for a five-course formal meal.)

Nothing is set in stone, but the Brimbank Writers and Readers people are excited about us strange and wondrous IF creatures. (Also? They still want someone who writes parser to join the panel, and get slightly paid for it.)

The panel is super long, so it’s definitely not necessary to come to both panel and cafe. But I’ll be at both, so there’ll definitely be at least one person there.

Hi folks! I’m the library staff member who’s organising this panel and I just wanted to drop in, say hi, and explain a little more about what it will be.

So a little about me: I’m an advocate for play in culture, and… meh, it’s at my site if you are actually interested. The key thing YOU need to know is that as part of that broader mission I have the goal of seeing all forms of narrative play recognised as valid literature.

The panel is intended as an introduction to interactive storytelling for a general audience - the assumption is that most attendees will have some interest in literature generally but be unfamiliar with interactive options. (Though feel free to turn up en masse and demonstrate the size of the existing audience for these forms! It will help in some of my other work, actually getting these media into libraries.)

This means we’re covering not just IF, but tabletop roleplaying and LARP. The reason the panel is planned to be so long is that we’ll be asking the panellists from each medium to give a 10-minute intro to (also, plug for) their particular form of storytelling, then diving into the actual panel part.

The plan for the panel is to talk about the different ways in which each engages literary skill and storytelling tradition, as well as the larger question of how interactivity affects audience engagement with story.

I’ll be moderating the panel and I’m aiming to have 2 reps from each of the above forms. I’ve been published in some Pathfinder supplements, and Wade Dyer will be the other tabletop rep as he’s a local who as successfully crowdfunded and self-published his own game (Fragged Empire). For LARP, I’m talking to folks from Swordcraft and the local freeform community. And in addition to inviting Felicity, I’m also looking for a local parser IF author to talk about that particular aspect of IF. (If anyone has any suggestions for Melbourne-based parser IF folks…)

I’m also hoping to come along to the meetup to pick your brains about libraries and IF, if that won’t be seen as intrusive. I am not especially active in the IF scene, but I am interested (and played a bunch of it back in the Infocom days… not to show my age or anything) and have kept enough of an eye on the scene to find this board. However, work obligations may prevent me attending.

Hope this sounds interesting! Please let me know what you think

Hi, Phil! I won’t be anywhere near there, but I think it sounds great! Toronto’s WordPlay festival shows how well some of these things can go over in libraries and I’m always excited to hear that there’s another librarian interested in showcasing IF. Best of luck!

It sounds like morning tea will be a good time to do the social part of the meetup (and any other time, of course). There’s a Jolly Miller Cafe in the same building as Sydenham library, where the panel will begin at 2pm (not to be confused with other Jolly Miller Cafes around Melbourne).

And around the corner to Sydenham Library 2-3:30pm for the panel, possibly followed by LARPing and/or further shenanigans.

Speak up if that doesn’t work for you (and there’s something that does).

Would love to attend. I’m in Brisbane but hopefully can make it down - I was thinking a while back maybe we should create an Australian Interactive fiction group.

Facebook could be good for spreading the gospel of IF to the (Australian) masses. What do you think?

Whatever group we have should allow honorary Australians too (poor things).

We seem to be very carefully arranged so there’s exactly one of us in each Australian state.

We seem to be very carefully arranged so there’s exactly one of us in each Australian state.

I’ve noticed this too! I find it either delightful or infuriating, depending on my mood.

Facebook could be good for spreading the gospel of IF to the (Australian) masses. What do you think?

Well, I’m not on Facebook at the moment, but if I were, I would be very happy to join such a group. (I recently reactivated my Facebook account - then I went, “wait there’s an election on. ABORT. ABORT.”)

Right now I’m doubtful about what my finances will look like in September, but if they’re favourable closer to the time, I’ll see if I can make it across the country! I’d really like an excuse to finally visit Melbourne.

I’m happy to create a ‘Australian Interactive Fiction Group’. Everyone happy with that.

Oh by the way if you have time check out my games facebook page
facebook.com/thehomecominggame/

We have started a facebook page titled ’ Australian interactive fiction group’. All welcome to join - would be great to get a little community going in Australia.

Yes, the Aussie IF meet-up is absolutely happening, and so is the “Participatory Fiction” panel of the Brimbank Writers and Readers Festival (including yours truly and several others covering other forms of fiction). It’s less than three weeks away now!

-And optionally around the corner to Sydenham Library 2-3:30pm for the panel, likely followed by LARPing and/or further shenanigans.

I’ve booked my flights now, so at least two Australian states will be represented (and probably many more). At least one other Tin Minion will definitely be there, so if you’re a fan of Tin Man Games (in my opinion, Australia’s biggest and best producer of interactive fiction and games) this is a unique networking opportunity and/or a way to see how the professionals are just like us.

Some of my best friends are fellow-writers I’ve met at writing events like this one, and three of those friends have become international best-selling authors since I first met them.

I’m 175cm all with long brown hair, a dark pinkish T-shirt and an ankle-length dark green skirt with a grey panel at the front.

I’ll let staff know who we are (“IF Meetup”/“Interactive Fiction Meetup”) so they can direct people too.

So how did it go, for those who made it?

I liked it, but of course I’d say that, wouldn’t I?

I had a personal connection to most of the people who came (a Tin Man Games person, the organiser of the Brimbank Participatory Fiction panel, a YA fantasy author interested in jumping into IF for the first time, a Choice of Games author) except for the two people who actually showed up on time (while I was stuck elsewhere). Fortunately the pair who were early to the meetup also came to the panel, so I was able to (a) Apologise profusely, and (b) make sure they got to meet the others.

I bet there are plenty of gaming events I’m not aware of that would also provide opportunities for Australian IF-ers to cross paths. I’m connected to a lot of writing conferences, but the closest I get to gaming conferences is Supanova (Sydney). Australia’s population is small enough that we’re bound to run into the same people over and over, which is enjoyable in its own right as well as being potentially useful career-wise.

We’ve got a facebook group now, so that’s a handy way to know where people will be as events occur.

PS Speaking of conferences, I’m running an IF workshop - focusing on writing style and ChoiceScript since Choice of Games pays well - in Canberra as part of Conflux.org.au (Sep/Oct).