Masters of Constantinople - new game I worked on!

Hey folks, a new web-based game I worked on at my day job has recently been released. It’s called Masters of Constantinople and it’s a historical narrative game where you play an initiate in a secret society in Constantinople before its fall in 1453. I worked on co-designing the game with a team and implementing it using Undum (as I did for The Play) and some additional Javascript magic. (Sadly, I didn’t do the writing, and the art is way prettier than what I’m usually able to create on my own!)

Anyway, if you’ve got some time to check it out, I’d welcome any comments!

I have not yet really played with it, but just looking at the intro the first thing that jumped out at me is that if Ronaldo were to gain a hundred pounds or so and round off the square corners of his beard, he would look an awful lot like me!

I don’t have time for a full play right now (but I’m definitely checking it out soon!) It looks pretty swish, but unfortunately the font displays a little weirdly for me. Screenshot attached: 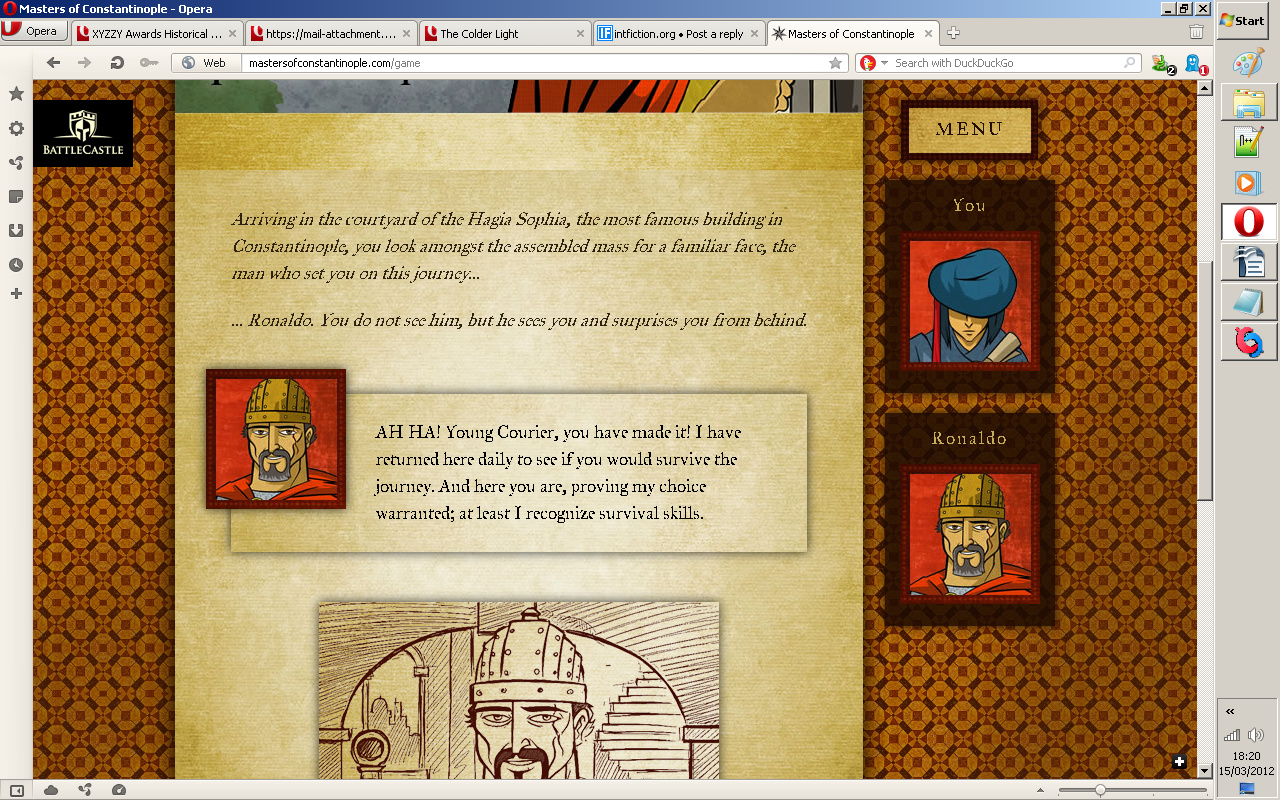 I have not yet really played with it, but just looking at the intro the first thing that jumped out at me is that if Ronaldo were to gain a hundred pounds or so and round off the square corners of his beard, he would look an awful lot like me!

Also Robert, I hope by this you mean to imply that you have an awesome eye-scar. It is a truth universally acknowledged, that a single badass in possession of a clear face, must be in want of an eye-scar.

I don’t have time for a full play right now (but I’m definitely checking it out soon!) It looks pretty swish, but unfortunately the font displays a little weirdly for me.

Looks the same for me on Windows. I bet that it’s a Windows display issue with certain weights of the font, as there are other fonts that look just as terrible on my monitor.

Ooh, weird about Windows and fonts! We’ll be investigating that. Thanks!

The font looks better with ClearType disabled, but is otherwise very hard to read.

In Chrome on Windows, you can select some text, right-click it and choose “Inspect element”, and then edit the CSS in the lower right to remove the problematic font (“IM Fell Great Primer”) from the list. It looks much better in Palatino.

Hi, Deirdra! I can’t say enough good things about that game. I have a hard time believing that there are those among us lucky enough to get paid to make cool stuff like that. (And then I get to envy your musical career also. Speaking of which, surely some Balkan music could have spiced things up here!) I played it all the way through at a blistering pace, striving to win every exchange with every master (not always successfully). As a consequence of the blistering pace, I didn’t actually consult the reference material provided, and ended up having to replay several exchanges. Also, due to my screen size, the statistics in the lower right were off-screen through most of the playthrough, but once I used them I relied on them extensively to suss out the “most correct” answer ie. one not only correct and cogent to the question asked, but I gather one also in alignment with the personal beliefs of the given master? (or am I giving the designers too much credit and wrong answers are genuinely wrong, just BS delivered convincingly? Since sometimes even a text adventure enthusiast suffers from a bit of TL;DR syndrome, some people may spend more time looking at the questions than at the preamble leading up to them – and if two of the three at a given time are actual balderdash, unchecked except by score-scrutinizers, that could be deleterious to an overall educational outcome if much of what players remember is wrong answers in not quite a sufficient quantity to scuttle the mission.)

My only personal gripe is that after the game has been completed there are no options for replay of specific sections except by starting the whole thing over again 8) Cheers and congratulations on a job well done.

Could you please make the whole thing available as a ZIP file for offline playing?

I did try just “saving the page”, as it usually works with the Undum and Quixe games I’ve been saving (having the HTML and then a folder with the rest of the files), but your game seems to be a bit more involved than that. Still, having the whole thing as a ZIP would probably allow for offline usage, yes?

surely some Balkan music could have spiced things up here

Either that, or the old song that tells us that “Instanbul’s not Constantinople anymore!” Those are the ony words I remember.

Just started playing, and ran into a problem right near the beginning. In the first conversation in Anna’s office, I chose If the texts you have are half as delicious as your food, that won’t be a problem unless you run out of salt. and the game just hung. The mouse click seemd to “take,” but I never got any response.

surely some Balkan music could have spiced things up here

Either that, or the old song that tells us that “Instanbul’s not Constantinople anymore!” Those are the ony words I remember.

EDIT - Damn you, sir, damn you thoroughly. Now the music’s stuck in my head. It was AGES before it got unstuck LAST time, plus I’m singing a duet from La Boheme today. Let’s hope I don’t go “O Istanbul, tu più non torni!”…

Further to the problem I was having with the game hanging, I’ve discovered that it works OK if I hit the “refresh” button every time after making a choice. Has anybody else run into that?

In any event, having now gotten a little ways into the game, I like it a lot. However, being fundamentally lazy, I’ve been trying to play it without reading the links that actually provide the necessary information, relying instead on my own (incomplete at best and now quite rusty) knowledge. This had led me to the conclusion that the most appropriate musical accompaniment, for me at least, would be the old song that starts “Don’t know much about history . . . .”