Is there a way to develop IF on the Apple II?

This is a pretty niche question, but is there any apple ii software that can write IF? Basically, software on the apple ii that writes IF for the apple ii?

There was Adventure Creator, which I never used myself and don’t know where to find a download of. There may be other, similar programs, but that’s the only one I’m aware of.

I would not be surprised to discover that the majority of non-commercial IF for the Apple II was homebrew software written from scratch in BASIC.

Most adventure games I wrote for the Apple II as a kid/teen were what folks now call homebrew. The engine (re-created in BASIC each time) was derived from Usborne’s 'Write Your Own Adventure Programs’ book.

The only software system I’m aware of is Eamon, specifically the Eamon Dungeon Designer. Eamon has a character creation and RPG system which, it sounds like, you probably don’t want. To bend it to your will would require hacking, but only BASIC hacking. Apologies if you know the following stuff already, or alternately if you think ‘That’s not very systemy at all!’

It would definitely be possible to use the Eamon Dungeon Designer to generate all the prose data in different categories, and the room connections. Then go to the MAIN PGM (the one that ‘plays it all back’ at runtime, which is in BASIC) and delete anything related to the RPG stuff. Now you’re left with the ability to walk around, get stuff, drop stuff, examine stuff, open doors, etc. The fundamentals.

Next, you want to make it self-booting. Eamon games are normally entered by loading your character from the main disk, then taking it out of the main hall and inserting the particular adventure’s disk. Behind the scenes, it really just copies your character to the game disk then runs MAIN PGM. So you cut out the rigmarole in MAIN PGM that loads in a character, so that the game can just be played by running MAIN PGM straight up.

The last thing is, you then have to add in any trick programming particular to your game. Anything not handled by the most default situations has to be added as BASIC exceptions in the MAIN PGM. This is what you have to do even for an RPG Eamon. At this point, you’ve already made MAIN PGM a lot smaller by gutting it, so there’s a lot of room for that in RAM.

I used version 7.1 of Eamon to make my games (on this page, search for ‘7.1’ to find the disk images). There is an 8.2, but I don’t think it’s a great advance, while 7.1’s program is completely annotated online, making it very easy to modify.

For the sake of completeness and my own ego, I will mention the system I developed and had published in the May 1985 edition of Nibble Magazine, Adventure Construction Set. It should not to be confused with other, better, systems of the same name. I originally submitted it as AWAPS: Adventure Writing And Playing System, but the editorial staff changed the name.

It was written in BASIC and the listing ran about 4 pages. The AWAPS language looked like this:

In other words, in room 2 if the player tries to take the wand, make it disappear. What can I say? It was the 80’s.

I remember loving EA’s Adventure Construction Set on the Apple IIe and some older PC (I think? I know I had stunning 4 color CGA graphics to play with so it wasn’t just on the IIe). The name is a complete misnomer since it actually made games more like CRPGs as defined today rather than adventures.

I know there’s RPGMaker today, but I kind of wish for something that simple that could create games playable on modern systems. 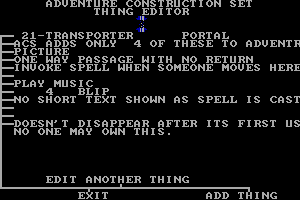 How was your system with RAM? That was always a hard limit on a BASIC II game.

Oh yeah, I loved ACS. It was on the Apple II. It may have been released simultaneously on the C64. It eventually got to the Amiga.

Unfortunately I never made anything really good with it. I mean, it took as much work to make a good adventure with ACS as it ever does (maybe more, given the amount of disk-swapping involved, and the time spent going in and out of menus). The built-in adventures were great, especially the biggie, Rivers of Light.

I remember trying to make Ultima V before Ultima V existed (and I didn’t understand any previous Ultima when I was 11 or so). I also tried to make the arcade game Gauntlet in ACS. When I say tried, I started from a blank template. Just making some ghost graphics took so long I never made it to the game.

Sadly, although the actual program has been made available for free download, the article which documents the system is still under a copyright that I don’t own.

Excuse me if I have no idea on the topic at hand, but this is not the purpose for Dialog was designed for?

I mean, Dialog is supposed to be a light classic adventure creator in the infocom style, compiling for z5 or z8, I think, so, now you only need an Apple II Z machine interpreter.

Yeah, but if you are going for a completely retro-computer experience, do you really want to use something as nice as Dialog? In the 80’s we typed in hexadecimal from magazines and thought it was a good time!

Apple II has already Z code interpreters back in the 80s? So the retro experience is the same.

I think The Quill was available on Apple II. I’ve played a few games made with it, and there are quite a few out there.

Regarding Z-code games on the Apple II:

It’s possible to use Infocom’s interpreters for the Apple II. If you want a terp that you’re actually allowed to distribute, you may want to look at porting Ozmoo from C64 to Apple II.

A question regarding Infocom Interpreters: do they interpret code or is it a coding language?

Infocom interpreters take in games that are packaged as z-machine files (like .z3) and play them. They’re a ‘virtual machine’.

The original infocom language has been recreated with the ZILF project. Inform 6 and 7 and Dialog are other coding languages that compile to z-code.

I think The Quill was available on Apple II. I’ve played a few games made with it, and there are quite a few out there.

Though it’s likely the vast majority of those were made on the ZX Spectrum, an incredibly popular UK computer that the Quill was first released for. Quill was a very popular tool among ZX Spectrum gamers, and used for a very large number of ZX Spectrum games.

It needs to be written up properly as a history!

There’s another good book documenting the Spectrum UK side of things. This time from the early 1990s, and homebrew games, again largely written with the Quill. Gareth Pitchford’s Twilight Inventory. I haven’t read this yet, but have heard very positive things about it, and it’s waiting to be read on my Kindle.

Not IF related, but I found “It’s behind you” a fascinating read about the ZX Spectrum (and UK in general) game development scene.

Edit: Actually there is some IF content in the book - I read it a few years ago.

Yeah, I associate The Quill with the UK adventure scene. I lived and played through the whole Apple II lifespan and never saw The Quill, or anything made with it (at least knowingly) on the Apple II in all that time. So the tag is probably completist rather than representative.
-Wade