Is location images no longer viable?

I tried following the various threads to get location images by emily short working, but have been unsuccessful. Has it has fallen out of scope and I should be looking for another way to do this?

I did a test from scratch in the IDE and found it to work there.

That is, I opened a blank project, pasted in the source quoted in the docs of Location Images –

– placed two different jpgs with the quoted filenames in the Figures folder of the Materials folder, and clicked GO. This opened a game showing the first pic, and when I went west, I saw the second pic.

So when you say ‘unsuccessful’, we’ll need to dig a bit.

First thing to check is whether you can repeat my experiment in the IDE, and whether you are using the Public Library (i.e. straight out of the IDE’s box) versions of Location Images and Simple Graphical Windows (the former 'include’s the latter). These versions do not call upon Flexible Windows, one of the most continuously revised of all extensions over the years, and a likely culprit in malfunctions, at least in terms of – all extensions involved need to be right for the version of Flexible Windows you/they are using, for things to work. Earlier or other versions of Simple Graphical Windows may invoke upon Flexible Windows.

If you get it working in the IDE, then the next likely failure point is if you export a game as a website, play on the website and find no images. This is because of some business where the images have to be processed first for online use in a step the IDE can’t perform. I’ve written a post like this before and it devolved into, ‘uh, it’s annoying, here’s a link to people trying to do it.’ I’m slightly annoyed at myself that this post is headed that way, too, but in the meantime, let’s see if you can get it going in the IDE!

EDIT - I think Zarf’s April 2021 update of his ifsitegen.py script may incorporate the image-processing step. So if you output a gblorb from the IDE, then make the site from the gblorb with the script instead of the source’s ‘release along with a website’ option, that should do the whole thing. I think.

Could you add when play begins: say "[complete list of extension credits].". to your code and let us know what it says so we can see what versions of Location Images’ dependencies you’re pulling in?

I can’t get the simple, basic project working. I’ve attached three screen shots. The first is the IDE with the graphic window running and the extension credits listing at the start of the game. The second is a snapshot of the folder structure with the two sample jpegs in the Figures folder. The last one is the IDE version I’m running. 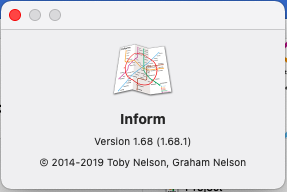 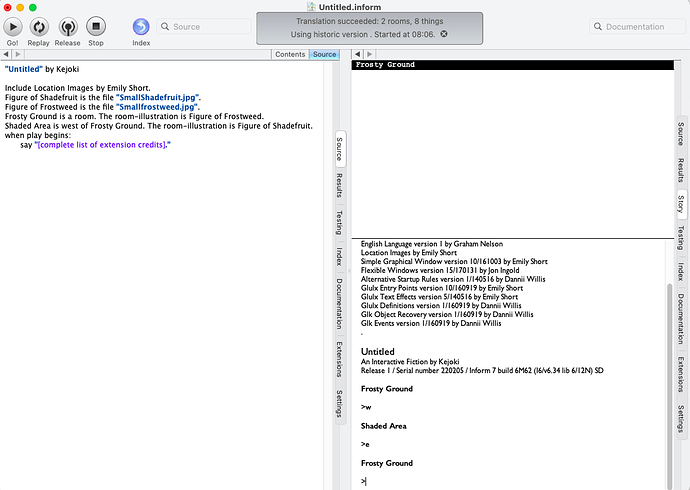 As severedhand mentions, it looks like you’re not using the version of Location Images from the public library (on the Extensions tab in the front-end), as that doesn’t use the Flexible Windows extension. Where did you get the extensions from? The ones on the public library are not always the latest versions but they are tested and do work. Others from around the net might work, or might conflict with other extensions, but are definitely harder work to get going.

I would start by archiving and deleting your existing extensions, then getting Location Images (and Simple Graphical Window, which it depends on) from the public library, and trying that.

Yup - all the downloads i got from the various links i followed must have broken something. when i nuked the whole extension folder (.old) and restarted with just those two extensions, things started working correctly.