The short answer is that it would probably be equally messy. I’m not sure how it would improve performance. I know parchment does just-in-time transpilation; is that what you had in mind? I don’t think that technique would have a comparable impact on Dialog code, since there isn’t a one-to-one correspondence between predicate queries and function calls.

Yeah I was thinking in terms of a JITting interpreter. But also from my experience with Emscripten - which is less necessary seeing as you’ve already provided a JS terp. So it probably won’t actually be an issue.

The specification is still at version 0.1.

For example a link to a photograph or additional optional narrative?

Yes, I have some plans for this. But it needs to be designed carefully, to blend in well with the rest of the language, and to encourage (as far as possible) self-contained games that can be archived.

Very good news. My use for limited external links involving photographs and possibly audio as a post lesson clarification in an educational based project.

From now on, the version number has three parts. The first two are equal to the specification version, and the third gets incremented when the tools are improved without changing the specification.

Changes introduced in version 0.2 of the specification:

Changes introduced in version 0.2.1 of the web interpreter:

Changes introduced in version 0.2.1 of the Node.js interpreter:

The Dialog system is amazing. Its features keep moving toward things that will find most useful. In this case, the availability of external links will be most useful in education applications that I have in mind for special needs students.

If there is a Jesus, he must be Linus.

Version 0.2.2 fixes a bug where external restart (e.g. from the menu in the web interpreter) didn’t work properly.

It fixes a couple of minor bugs in the Javascript interpreter, but the big news is:

I have claimed that the Å-machine is designed to perform well on vintage systems. Now it’s time to deliver on that promise.

This release contains an interpreter written in generic 6502 assembly language, with a frontend for the Commodore 64 (equipped with a 1541-compatible floppy drive). A RAM Expansion Unit (REU) is required for the UNDO command, but is otherwise optional. The presence of a large (at least 256 kB) REU will also improve performance dramatically.

Creating a Commodore 64 version of an Å-machine game is easy. As before, the Å-machine toolkit contains a command-line tool called aambundle, that can read an .aastory file and create a directory with a self-contained web player. With the option -t c64, it will create a disk image for the C64 instead.

The performance on a stock system (C64 + 1541) is competitive. The first few commands tend to be slow (about 10–15 seconds), as the engine retrieves data on demand from disk. Once the system is warmed up, the typical response time before output starts to appear is about 1–3 seconds. Of course, printing a large chunk of text also takes time, especially if new content has to be loaded from disk. But that is all happening while you read, so it is not as frustrating as the initial wait.

With a REU, response times are typically less than a second.

I obtained these figures by running the Å-machine versions of Tethered and Pas De Deux. When the same games are compiled for the Z-machine, and played on a C64 with a REU (using Zeugma), they respond to commands in about 3–7 seconds. Without a REU (using Ozmoo), the response time is 1–3 minutes (!) because of the increased disk access. (I would have used the same interpreter for the benchmark, but Zeugma needs a REU by design, and Ozmoo crashed on these games in REU mode.) Part of the reason for the speed boost is that Å-machine storyfiles are only about half the size of their Z-machine counterparts. Each of these games now fits comfortably on a single disk side, along with the interpreter.

To put this in context, the original Hitchhiker’s Guide for the C64 (using Infocom’s own interpreter, and paging from disk) has response times of around 1–5 seconds. With a modern interpreter (e.g. Ozmoo with a REU), this can be reduced to half a second. So Dialog games are now on par with classic Infocom games in terms of performance, despite the fact that Dialog is a high-level, rule-based language with a complex in-game parser and standard library, more in the spirit of Inform 7 than ZIL.

In the long run, I hope this will open the gates for lots of modern, narrative-driven text games for the Commodore 64!

Updates to the specification

The original Å-machine specification document was written in tandem with the compiler and the Javascript interpreter, and went through several rounds of editing. As I wrote the 6502 interpreter, I went back to the specification document with fresh eyes, and discovered several errors. Another person, who I suspect is working on an interpreter of their own, also reported some. All of these errors have now been fixed, a couple of corner cases have been clarified, and the input tokenization process is described in detail. The document version number has been incremented to 0.3.

New option in the web player

The web player menu now contains a checkbox called “Always re-focus”. When this mode is enabled, the browser will move focus to the input text field after every move, regardless of whether the move was typed or clicked. This can be desirable (according to taste) when playing on a desktop computer. By default, the mode is disabled, and focus does not move when clicking on a link. This makes sense on mobile devices, where focusing on a text field will often bring up an on-screen keyboard that cuts the amount of visible text in half. 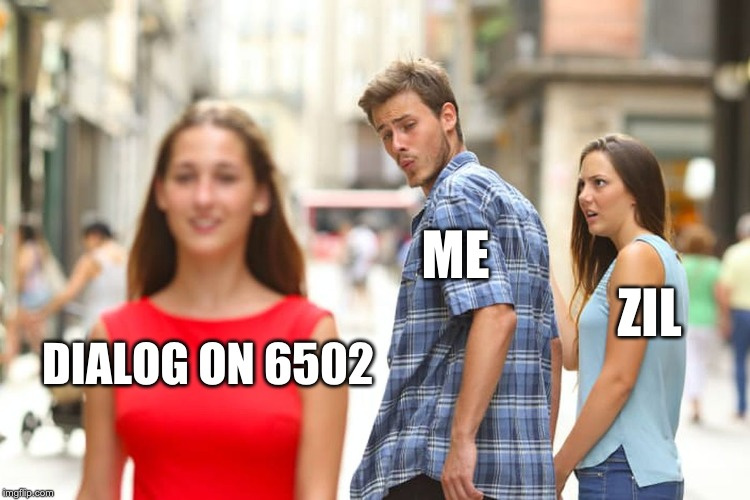 Version 0.4.2 of the Å-machine toolkit fixes two bugs that caused the various interpreters and tools to hang on very small story files. Thanks @Juhana!

Here’s version 0.4.3 of the Å-machine toolkit. There are two new features in the web interpreter:

If you use the web:story target, please be aware that the web interpreter also expects to find the original .aastory file in the resources directory, with a mangled filename. This is the file that gets served when the player selects “Download story file” from the menu.

Here’s the Å-machine toolkit, version 0.5.1. This is a companion release to Dialog version 0m/01.

Version 0.5 of the specification includes:

Improvements to the web-based interpreter include:

Version 0.5.2 of the Å-machine toolkit makes a small but significant change to the web interpreter:

Originally, the hover effect was created for two reasons: It would communicate to the player that links are shorthand for typing, and it would give the player a chance to see what they were about to do.

The effect is now removed (by default) because it gets in the way. Links are primarily useful on touch-screen devices, where there’s no hovering anyway. On the desktop, many players switch to typing because it is faster. But as new text scrolls into view, a link may slide in under the mouse cursor, and text is unexpectedly entered at the prompt. This is particularly annoying if the player is typing several commands in rapid succession, for instance while walking around the map. The feature has also been causing trouble for players with low vision.

Perhaps you could use a tooltip/title on hover instead? That should be less disruptive.

This is a good change for me. I have low vision and have trouble tracking a mouse cursor. I only see a small fraction of the screen and usually don’t have any idea where the mouse cursor is located. I can only use a mouse when I place my primary focus on the mouse cursor. When the input is automatically placed at the command prompt due to hovering, it can become a problem.

Here is version 0.5.3 of the Å-machine toolkit.

With these bugfixes, it is now possible to run The Impossible Bottle on the aambox virtual computer. This is an important step towards making it run on the C64.