Absolutely, so if there were one page for the game, it would be listed under the French title, with the English version downloadable from the same page, and the page findable when searching for the English title.

I think IFDB is pretty good as it is, as long as the users = contributors know what is expected of them.

I mean, it is probably a huge job to change it and people new to IFDB will find it harder to use. (assuming I understand your proposal)

I mean, it is probably a huge job to change it

It would probably be a massive undertaking, but there’s no harm in discussing it.

It would probably be a massive undertaking, but there’s no harm in discussing it.

Is a disambiguation page in the Wikipedia style possible? You click on the single listing of Collassal Cave Adventure in the search results (even if your search was for one of its hypothetical alternate titles), and it gives a general blurb that applies to all versions and then a list of links to each version, with the version(s) that triggered the search result moved to the top of the list? Might be more fluid and intuitive, but I couldn’t speak to the cost vs benefit analysis, because it isn’t hours and days of my life being expended to make this change.

People have so many different good examples in this thread that it’s kind of hard to think of one single policy that would cover every scenario. Reading it I’ve changed my opinion multiple times. 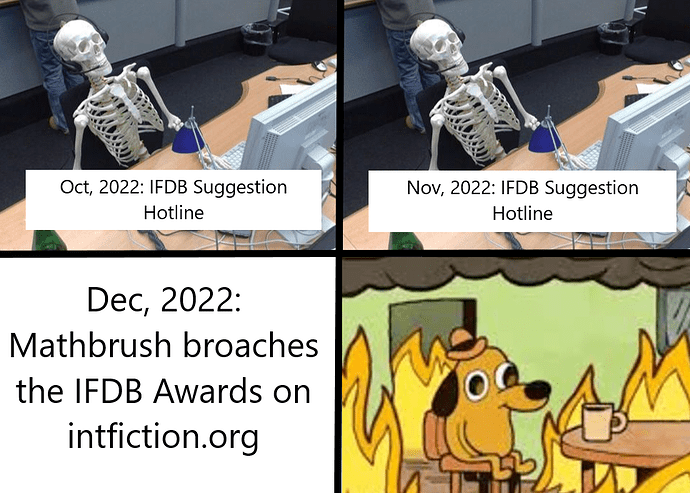 (ETA: Sorry if my humor doesn’t land with you, my mind tends toward hyperbole and absurdism, so my mental exercises often end in extremes. No disrespect to the hardworking folks at IFDB and the IFTF or @mathbrush himself.)

But first, here is a quote from IFDB:

If Michael J. Roberts wrote these guidelines, and also implemented the ability to mark one listing as a “translation of” another listing, then my guess is that a game that has been translated into another (human) language is not what these guidelines are talking about.

If nothing else, it might be possible to feature closely related games more prominently on the page. So the “translation of” line (or “port of”, if there is something like that) could be closer to the top, maybe? Or near the download links. Here it’s at the bottom of the game details: En Garde - Details (ifdb.org)

You are probably right about all this. I just think it should be stated more clearly so people don’t have to investigate features to deduct what is meant. It can easily be misunderstood. I know the guys behind it are busy but it is good to discuss the shortcomings. As this is just text, it should be easy to improve.

I just think it should be stated more clearly so people don’t have to investigate features to deduct what is meant. It can easily be misunderstood. I know the guys behind it are busy but it is good to discuss the shortcomings. As this is just text, it should be easy to improve.

I agree that no matter what the policy is (or becomes) it would be nice to make it clearer, and that changing just the text should be a pretty easy change.

One of the strengths of IFDB is that anyone can contribute entries, but that does make enforcing and policing rules difficult… especially if there isn’t an additional moderation process. Even when rules are clearly defined there are always edge-cases and those pesky exceptions that prove the idiom. I think I’ve mooted the idea for a “flag to merge” feature (or “flag to delete duplicate” button) that would at least get users involved in the process of tidying things up… or allow us to easily flag accidental duplicates.

On CASA, the rule is a single game page for each game per language, unless the game is significantly different, but there are loads of edge cases and several examples that we haven’t yet managed to coax into one entry… in some cases because it is less confusing keeping them separate.

One page per game can lead to some very long and complicated (arguably interesting!) entries… which would perhaps require some additional thought about how tags for multiple adventure systems were dealt with… along with how to show multiple publication dates… multiple publishers… multiple authors… etc. Would the policy be to have the original author, system & date as the headline information, with anything else detailed in the body of the description? How easy would it be to manage large numbers of different downloads on the page? Is there a role for IFWiki in terms of helping to provide context, links & relationships between different versions of games?

Games with long histories can get pretty complicated. Here are some examples of long, convoluted entries from CASA, to give people an idea of what might need to be considered…

Is there a role for IFWiki in terms of helping to provide context, links & relationships between different versions of games?

The big IFWiki project for 2023 (hopefully) will be sorting out the game pages, including adding a database structure (like for the IFWiki Software and Events pages).

I hope that IFWiki game pages will be able to be coordinated well with the relevant IFDB, CASA and IF Archive pages.