How do I do an open outdoors?

I wanted to have something in game that let the player explore places outdoors, and then if they are inside a building, or in a town, there would be a set layout for those specific places.

For instance, The wildlands would incorporate the places that exist outside of each town, basically an explorable place that allows you to walk in any direction without hinderance until you reach a stopping point or a set layout place.

I think you’d have to have sections of the outdoors that were each “rooms”. A room can be a field or a forest or outer space, not necessarily inside. Am I understanding your question correctly?

I’m not positive if this is what you’re after, but this

That was elegant. Well written piece of code.

@zed tends to do that. It’s kinda like poetry.

You’re too kind. On a good day, I get in some good tricks before I finally step on the rake and smack it in my face. 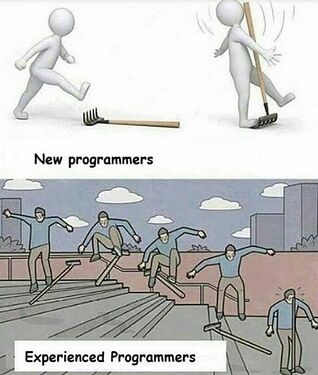 A stick figure taking a step onto a rake which pops up and smackes them in the face is captioned &quot;New Programmers&quot;. Another figure, captioned &quot;experienced programmers&quot; is riding a rake down a set of stair railings, doing spins and tricks, and when they finally dismount, they... step on the rake and smack themselves in the face.799×942 82.2 KB
7 Likes
Neurosion April 13, 2022, 8:40pm #7

So there’s just one bit of this that doesn’t work, and now I’m compelled to understand why. As written the “Instead of going up/down” rules don’t trigger (at least on borogrove). If I add a couple of stub destinations up and down from vast open space, everything works as expected.

Then it seems like you should make many different rooms, all labelled “Vast open space”.
Like this:

And just keep adding them as needed.

**Originally replied to Zed’s post for some unknown reason. Gah.

This will work I think

Yes a given route will go to the same place.