Hint Request: Shadow in the Cathedral

OK, I’m in the cathedral.
I’ve given the work order to Doric and he wants the creed. It clearly has something to do with the spring, since he tells me I’m very close when I say “In the name of the spring.”

My feeling is that I need to stop the noise made by the giant clock every time the monk says “In the name of the…” and then is drowned out by the noise. Is this correct?

If so, do I need to get into the grate to get access to the giant clock? I can’t figure out how to get up there. Can I get a hint about the grate?

If not, can I get a hint for where I’m going wrong?

I haven’t played the game but the Electron version is supposed to have hints embedded in the application.

Electron versions contain maps and hints and an easy executable for Windows, Linux, and MacOS.

Indeed, full hints are in the itch.io downloads.

Cool! I just hit the play online button and didn’t know about the itch version.

But where are the hints? I downloaded the macOS file, but don’t see any hints. Is it a separate file that I just don’t see? Or do I have to restart the game to get them? I probably won’t restart it.

But where are the hints?

In Windows, they’re in the drop down “help” menu at the top of the screen. Need to launch the “shadow” application instead of separate interpreter, I believe. 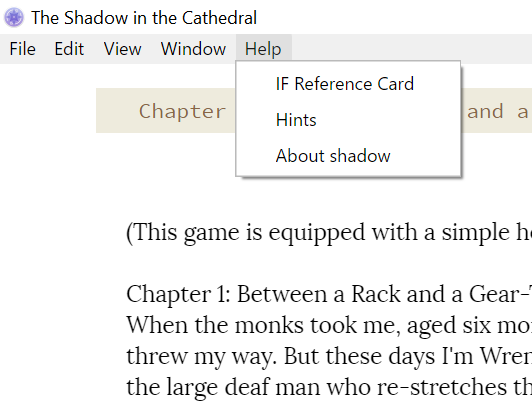 Ah, thanks! Found them. Well, I have to say, I never would have gotten it on my own. I was simultaneously overthinking and under thinking it.