Have any works been renamed after publishing? If so, why and how?

This is a question that’s bounced around in my mind for a while.

The thing is, I have something almost ready for testing for both IFComp and ParserComp, but … the titles are horribly generic!

While I’m usually able to find something at the last minute, there’s still that worry, and it also leaves me to wonder:

If someone writes “Andrew’s Big Dragons and Castle Game” and, say, finds the “real” title 3 days into a comp, is there any way to formally change it later? (Probably not during the comp.) E.g. at IFDB? Or renaming it on itch.io? Or is the author stuck with it?

I haven’t had much post-title naming regret. Though part of me thinks it would’ve been op (as kids these days say) to rename Shuffling Around to A Roiling Original, then rename A Roiling Original to Ordeal Reload. Too late now!

The thing is, I have something almost ready for testing for both IFComp and ParserComp, but … the titles are horribly generic!

I think it’d be good to nail down less generic names before the comp(s) begin, unless you actually want to commit to the generic name being the real name. I suppose my argument is that there could be logistical work or trouble for others involved (admin trouble) if you do any name change, and that trouble could in turn affect the findability or searchability of your work (player trouble). The different name itself could affect those things, too.

PS - I thought of a few name-changed games off the top of my head. The first two Andromeda Games had the game code updated and name appended with things like ‘The Final Cut’. The new versions replaced the old versions in current databases, with the old ones still available in the IFComp archives. So they were name-changed to indicate significant revision. They were expanded outside of comp time.

Another one is Jim Aikin’s Last Resort, where he produced a significantly expanded second version with the new name Lydia’s Heart.

One I know of specifically is a CoG: For Rent: Haunted House used to be Eerie Estate Agent.

I’m guessing it was changed because the wordplay didn’t quite land and players didn’t glean what the game was actually about (a lawyer who’s eerie?) I personally would have gone with unReal Estate.

Does “The Game Formerly Known as Hidden Nazi Mode” count? 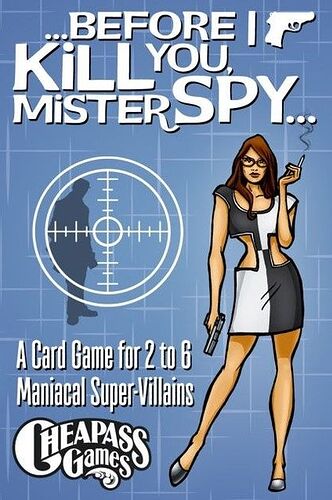 Before I Kill You, Mister Spy...

Become a supervillain, building a remote fortress and fending off annoying spies.

There was Echo Bazaar (the web-based RPG), which Failbetter renamed Fallen London after a few years because that’s what everybody was calling it anyhow.

I think it’d be good to nail down less generic names before the comp(s) begin, unless you actually want to commit to the generic name being the real name.

Agreed, I don’t commit to a game unless it has the basics, a reasonable title, etc. A generic name isn’t the worst thing, but I remember wanting to avoid it if possible, and I wanted to be able to remove the roadblocks to finding the “real” name. So often that opens up a few critical details I’d have missed otherwise.

I think ultimately I need to spend time wandering around my game in my head before a new name pops up–but the thing is, how it pops up worries me! There’s rarely a trail of logical bread crumbs that leads to it, which can leave me worried it might not happen this time.

And yeah, it seems like a really high-maintenance idea to rename something mid-comp. That’s not something I want to dump on the people who work to keep things going.

A funny/happy end to this: when I logged into the IFComp website, I said, “do I have to use (original name?)” Then I thought of a new one in relatively short order. I suspect having this question in the back of my mind helped.

Also, this may help people struggling for a title: as a thought experiment, picture a thoughtful critic saying “Why didn’t Andrew name (generic name) something more interesting instead? Like … (whatever I think of that might actually work)?”

ETA: post-IFComp name changes seem like not much of a problem at all for the IFComp team, since they have that “Play, download, or learn more about this game on the IFDB” link. Then you can just add any name-change history there to a descriptive field.