Recently I’ve come up with an idea for a Twine game which would use a verb-based interface, similar to what’s found in many older graphic adventures. To see if I can make such interface work at all, I decided to write a very short game based around it first, and thus Five Scarabs was born.

The game, a tiny one-room puzzle, can be played here: https://agat.itch.io/five-scarabs

EDIT: I’ve added the game to the IFDB as well.

I’ll appreciate any feedback, especially about the interface! One thing I’ve already noticed – it will likely be easier to implement it in a bigger game, but with less interaction points in each room (which is good news considering my planned project).

Here’s a sample screenshot of the game: 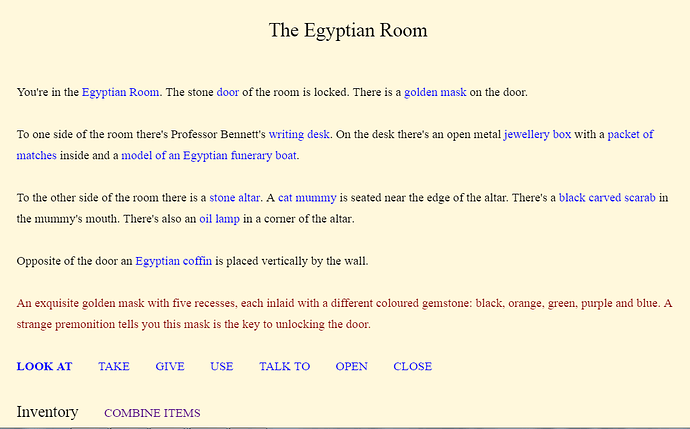 Also, if you know about any Twine games that use something similar, please point me to them! My cursory Google search yielded no results, but if such games exist, I’d very much like to see them.

I tried on my phone, and the game seems to work, but the forced landscape mode is annoying because I keep accidentally activating the switch-between-apps function as I reach towards the left part of the screen with my right thumb. For some reason this happens more frequently with this interface than in other choice-based games.

I tried the game on my phone and for me it switches between landscape and portrait modes. That being said, I agree the interface doesn’t work all that well on mobile devices, because you constantly need to scroll down to see the verbs and inventory. I have no idea how to improve this without making the font horribly small, hovewer… I could put the verbs on top of the screen, but then you’d have to scroll down to read the room description.

Also, if you know about any Twine games that use something similar, please point me to them! My cursory Google search yielded no results, but if such games exist, I’d very much like to see them.

If you’re unfamiliar with the tool Texture it’s worth checking out…though I suspect that clicking on verb then noun is (potentially) more screen-reader friendly than Texture’s drag-and-drop mechanics, which were designed for mobile (I think?).

I just took a look at this and it’s very impressive! Perhaps a bit busy for mobile, but it does give a quasi-parser (or perhaps more like Lucasarts SCUMM?) interface.

I found the interface pretty intuitive and solved the game quickly. I played on a Samsung tablet and for me the screen did not auto-rotate. The tablet has quite a large screen but I did have to scroll down to see the inventory once or twice.

Regarding the game, at one point I did get stuck and ended up trying the old Lucas Arts use-everything-on-everything technique to progress. It did not occur to me that I might be able to talk to the model of an Egyptian funerary boat.

Also, there is no link to restart the game at the end. When you refresh the page, you’re given the option to restore the game, but not to start at the beginning. Refreshing the page again gives you the Start Game prompt, but it still takes you straight to the end.

Overall, though, I think it works really well!

Big thanks to everyone who played and commented on Five Scarabs! I’m now quite convinced I want to make a longer game with a similar interface.

Also, there is no link to restart the game at the end.

Thanks for pointing that out; I’ve added a restart link at the end.

As for screen rotation, I think it has something to do with how itch.io’s “default” orientation works for different devices. Ufortunately, I don’t see a way of enabling rotation for all devices - the only other options are “landscape” and “portrait”.

I found this style very awesome! Would you mind if i use this sort of interface for a game concept i had in mind?

Glad you like it! I don’t mind people using my project as a template at all (especially that I didn’t invent this type of interface; it was heavily inspired by SCUMM games

In fact, I’m happy it serves as an inspiration, so feel free to use it!