Any other Yanks out there doing something for the eclipse today?

I’m having people over and they’re bringing Corona beer.

Partial eclipse in the afternoon up here! We went to the pool and brought pinhole viewers made out of cereal boxes. Many of the kids and parents in at the waterslide were looking at them (which was gratifying, because I was afraid I would seem like a big weirdo and embarrass my kids). Also I held my hand up to let tiny bits of light through so there were little glowing crescents in my shadow. Then we were sitting at a perforated picnic table which was more effective than any of that stuff-the shadow of the table was full of thousands of tiny crescent shapes.

I took this pic. I held the special viewing glasses over the lens of my phone. Best I could get. 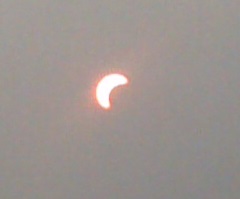 2024 eclipse is going right over me woooo

Some years ago, i wrote an eclipse “finder” that generates KML. If you get the attached file and open it in Google Earth, it will visualise the central lines of totality for years 2017 to 2030. Click on the little pushpins to tell you the date and time you need to be there.

Important: all times are in GMT, so you have to manually convert to local time (unfortunately).

Edit: Looks like this forum is too lame for KML files, had to zip it first.