This first batch I did play earlier this month, so maybe some of them have been updated since.

How did you manage to do that?

I just kept playing. I chose all “good” choices, so no raids if that matters. Sorry I didn’t take a screenshot in case there is some meta thing there… I remember the repeated prompt I got at the end once it ran out of memory was something like

I tried a couple of commands but I got out of memory errors for everything I tried typing in.

It doesn’t matter what choices you make – the game just ignores them and generates random responses!

I think that the errors you saw were probably “syntax error” messages. When the game ends, it just drops you out to the BASIC language prompt of the emulated Commodore 64, and if you keep typing “Y” or “N” (or pretty much anything that isn’t a valid statement in the BASIC language), you’ll get a “syntax error” message. So it’s not a meta-game thing! 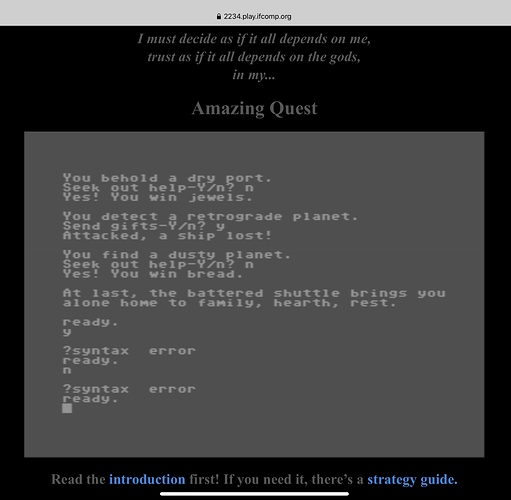 Where the Wind Once Blew Free

From what the author has written, I understand that he was trying to reverse engineer one of the infocom mysteries, and ended up writing this one. I am not aware if he knew that Graham Nelson had already successfully reverse engineered infocom, twenty seven years ago, but he has indeed created a game engine with that same familiar look and feel. I rather enjoyed Happyland.

A Murder in Fairyland

(is there a better way than asking for help a bunch of times until a person comes along?)

Once you get the Textilekinesis spell back, you can cast it and use your scarf to hold the door open. I was then able to click immediately west after that without any prompting at the door. Omini clued me in.