I had the idea for D’Arkun many years ago. The working title was “The house at the cliff” and I was thinking about a story of a house which was built on the foundations of the century years old remains of a city called D’Arkun, built by an ancient culture. The name comes from “Kap Arkona”, an idyllic holiday coast area in Germany. Of course, this area’s not so idyllic ingame. So the course was set for the protagonist to have spent his holidays there to discover the secrets of this place.

Over the years the story took many twists and changes until I felt - after this long corona period in Germany with its ups and downs - finally willing to write this all down in English language and - after hesitating what to do as the story turned out to be a rather long one - entering the whole thing into this years IFcomp. It was the first time for me to write a game in English.

Thanks to my great testers, the story could be polished in manifold ways and I was finally convinced that I have something to show to the audience.

After the comp I feel proud that I was part of it. I wasn’t able to collect transcipts automatically as Dialog has the option to send transcripts to a server folder but I didn’t have enough time to figure out how that works (and this would have meant to host the game not on IFcomp site so I decided to let things go for now). I would be thankful for additional scripts (feel free to send them to me) and for any further feedback. I will publish a postcomp edition as soon as I feel ready to go.

Thanks again for your great support and for the thrilling weeks of the competition.

Below is the concept paper of the game, a bit blurred to make it less spoilery 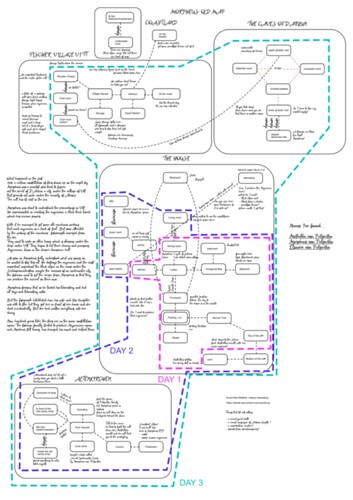 I LOVED D’Arkun. Thanks for writing it… it was one of my favorite games in the Comp.

Thank you for sharing your relationship and roots of the game.
I appreciate to know the ideas and lore behind the game and your development.
As we have talk in private about this very big, inmersive and vibrant game, I expect you will give it some workaround polishing and growing a GAME as Darkun deserves.