"CONDEMNED to the DEPTHS" - An Interactive Comic Made in Twine 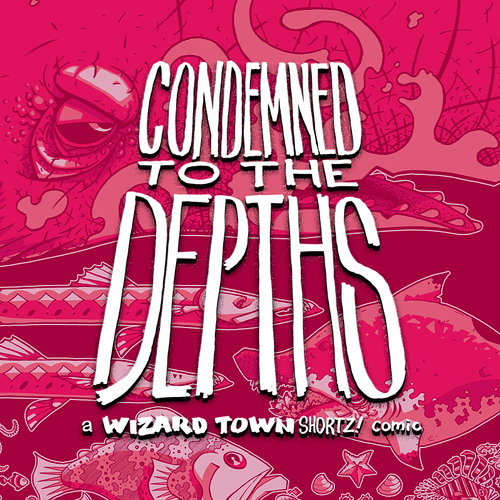 Hello! I’ve recently completed my comic, CONDEMNED to the DEPTHS: a short experience built in Twine using Jinx, an interactive comics story format I’ve been developing for a few years. It’s a grim, wistful tone poem about trash, regret, and the pitiless sea—and mostly a vehicle for drawings of fish floating in grim silence beneath the waves. I hope you enjoy it!

Two things to nota bene. The first: this is a comic intended for large screens. Would that it played nice on mobile, but at present, the art is too large. The second: at present, choice mechanics in Jinx are limited. Interactivity has thus far been focused on making a chunked, temporal reading experience rather than branching narrative. As such, CTTD is a linear comic.

Impressive. Really great drawings, I love them. And the Jinx format looks like a simple way of creating an interactive comic. The way you use transitions between panels and inside panels is really good, and the code to create them is easy enough. Jinx seems to have great potential.

This is very smooth, but I have the “I can’t read that slowly” problem. The next-page button should always be visible, even if you think pressing it right away will screw up the pacing.

Exactly my thoughts. Gorgeous graphics, but slowtext is always obnoxious.

I had the exact opposite problem. I thought that the “continue button” was the loading button. You know… filling the water till the experience is ready XDDDDD

Amazing. I played all your comics. I loved The Love Robot.

Really beautiful. The pacing of the text was just right for me, but I tend to read a bit slowly.

I had the exact opposite problem. I thought that the “continue button” was the loading button. You know… filling the water till the experience is ready XDDDDD

I sat at the title screen for way too long thinking ‘gee, this is taking a while to load.’

The button probably shouldn’t have the same size, style and screen position as the standard loading icon.

This is a bit of a late response, but thanks for the feedback everybody!

I appreciate the critiques. The button UI was always planned, but implemented last-minute and never tested by anyone else, and I’m kicking myself for violating a personal rule about making purely iconographic UI elements. Buttons should explain what their function is! Everybody who was confused is entirely justified.

As for the pacing, I hear you. CONDEMNED is a bit of a weirdly slow Jinx comic; most others have far shorter animations. It’s not yet technically possible to skip animations in Jinx, but I see the value of it and plan to include it in an upcoming animation refactor. If nothing else, it’ll make building and testing comics a little easier