Beta-testing thread for 'Never Gives Up Her Dead' (closed)

I’m working on a very large game that involves travelling through ten different dimensions. It should take 1-3 more years of work, so I’ll need a lot of testers over time, and I’m setting up a thread for long-term use. I plan on reserving this first post for general updates.

The game is set on a damage colony ship. Everyone is in despair about the ship going down, but rips in space-time have appeared throughout the ship that only you can see and enter.

Edit: I don’t want to get anyone’s hopes up for this game; there’s a long tradition of IF authors spending years on a big game only for it to crush and burn. I have a whole IFDB list of these games:

So I wouldn’t be surprised to see something similar here. But big games hold a certain attraction, and poking through one can be a lot of fun. So that’s why I’m trying to contribute one; if even a few people get a kick out of it, I’ll be happy! My other main goal is to have it mostly bug free, so that’s why I’d love to hear from you on this thread!

Right now, I’m looking for one tester to try out a big chunk of the first ‘dimension’. I’m only looking for how long the playtime is; any other feedback is great but I might make major changes based on how long the player takes. I’m shooting for two hours overall for the entire dimension, and will add more or less to it to finish the dimension off.

Let me know via DM or on this thread if you can help! I’ll probably be asking for a lot of help over the next few years, so if you want to help but don’t see this in time, let me know if you’d be up to help in the future!

I’d also like to help with this. I’ve been lurking around the IF Community since at least 2009 so I do have some experience playing IF. How good a player I am is at best subject to debate.

Just out of curiosity: does this game run on Gluxe?

Thanks everyone for volunteering! I’ve got people that have messaged and I’ve messaged back about the ‘checking how long the game is’. After I get that info back and add the new content, I should have something to actually test in the next month. I’ll send a message to everyone who responded here first to see if you’re still available, and if not ask for more. Thanks so much!

I have had a great batch of beta testers, and have added tons of stuff to fix the problems they’ve found.

I could use a couple of more people to help with some areas that are still rusty:
-someone (or ones) interested in technical aspects who can mess around with a clone that follows you everywhere in the second half and copies you. Possible problems include the clone gaining unrealistic powers (like grabbing the Sun) or doing things while not physically present.
-someone (or ones) with an editorial bent who can play through a walkthrough and give suggestions on where the text could be more descriptive

This is something I could pitch in with!

I am kind of overcommitted on IF stuff right now, but I super want to help test this and I should be able to pitch in by like late January, if any of these are still live concerns by then – if not, since this is such a big game hopefully there’ll be more opportunities to test later on!

This is something I could pitch in with!

Well that sounds great for the writing part; I’ll prepare a testing release with skip-ahead commands that will let you see the transcript more easily. Looks like I won’t need any more testers on that front.

Mike, I think waiting would be good; at the pace I’m going it will be a very long time before this is finished, so I’d rather wait until you’re free!

I’m testing another game right now, but I may be able to do some clone testing a short while down the road…

You’ve already helped a ton; I added over 3000 words of code in response to your tests. Because of that, I’d be happy to have you test more whenever you’re available, even if it’s in a few weeks!

mess around with a clone that follows you everywhere in the second half and copies you.

That reminds me of a game where the NPC (a ghost perhaps?) copied your moves three moves after you made them. It took me ages to work out what was going on, but once I’d eventually worked it out and captured the NPC, I thought it was one of the best implemented puzzles of all time, but I’ve played so many games, that I can’t remember the name of this one.

Can anyone remember the name of the game? I think it was a small game and this puzzle was set in a crypt.

Sorry for hijacking your thread, but the idea is related to yours.

EDIT: I tracked it down. It was ‘Faithful Companion’ by Matt Weiner. Check it out if you haven’t already done so.

Yes, it was Matt Weiner’s Faithful Companion, and was the direct inspiration for this puzzle. I actually thought of getting his help, since he’s a mod here, but I don’t think he’s been on recently. I did find his GitHub which helped, but since his ghost was mean and my clone was nice I had to work out some different ideas.

I’d also very much like to get my claws into your game, but it being the time of many family dinners (and other responsibilities), I don’t think I’ll be able to until February at the earliest.

There’s no way I’m not getting in the credits for this thing, so I’ll be happy to test whatever bits / whenever you like.

If you want to send the newest build, I’ll get to it when I can…

Thanks everyone, I think that’s enough people for now, and I’ll contact people in PMs that responded. Thanks!

By the way, I’ve decided to start using Github for backups, and I’ve made it public. I’m going to try to periodically update there, with gblorbs as well. The game is completely unfinished, but I know a couple of people like to poke around at this kind of thing so I thought I’d put it out there: 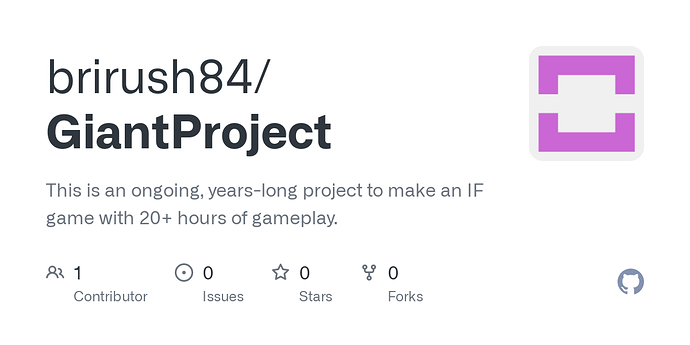 GitHub - brirush84/GiantProject: This is an ongoing, years-long project to...

This is a murder mystery set on a train. You are a detective, and have to interview four different suspects.

Like my previous game Color the Truth, getting a suspect’s statement takes you back into the past where you play as the suspect’s past self. Everyone is lying, and you have to find clues and get contradictions in their statements.

My overall plan is to have each of the 4 suspects have 3 versions of their statements, becoming progressively more truthful. Currently, I’ve implemented the first 2 versions of each statement. I have the other 4 sketched out.

I could use 1-2 people to try out the latest version to get overall ‘vibes’. I’m still changing things, so I’m mostly interested in:
-How long did it take you to play through?
-Were there any parts of story or gameplay that seemed weaker or stronger than others?
-Does the system work for you?

It should last between 45 minutes and 1.5 hours. It has very few puzzles; most of the action is acting out linear stories, with the only puzzles being examining and combining clues.

The previous dimension was tested a lot, but if anyone wants to check that out too, that’s fine; it’s a classic-style parser game with exploring a haunted mansion and a ruined castle.

Edit: great, got it!