Any Word On Inform 7 Update Progress?

The last word I heard on the progress was Narrascope 2020. There is no Narrascope this year. I know of no other place where he talks about progress.
I am particularly looking forward to an updated IDE for Inform 7 for Windows. I have read that the IDE will be unified between platforms so they all have the same feature set. Right now it sounds like Mac has the best version. IMO the skein in particular needs work.
I’m a bit surprised to see pretty much no discussion of this anywhere on the forum (that I can find)

There’s this thread that happened two months ago that will probably provide as much of an answer as you’re going to get. But I could be wrong.

I am particularly looking forward to an updated IDE for Inform 7 for Windows. I have read that the IDE will be unified between platforms so they all have the same feature set. Right now it sounds like Mac has the best version. IMO the skein in particular needs work.

I’m not sure where you read that, but I’m not aware of anyone working on anything like that. (I mantain the Windows front-end.) Work on the Windows front-end continues at https://github.com/DavidKinder/Windows-Inform7 with the most recent release being November last year, and updating the skein is on the GitHub issues list for the project. But when it will get done I could not say.

Seeing how that other thread is now closed …
After re-reading the transcript of Graham’s Narrascope 2020 talk, I find myself a little disconcerted.
Why? Well … It sounds like he’s been expanding the scope of Inform 7.
To wit: “But modularising Inform like this means it can be used to make different sorts of games, or different sorts of art. It would be really interesting to see Inform used as an accessible front end for the visual art language Processing, for example.”
While that may be “pretty neato,” it is WAY outside the original purpose of Inform 7. I suspect that the modularisation and dreams of Inform being a general programming language rather than purpose-specific may be one thing holding the update back. It almost feels like feature creep, which pretty much always dooms a project. I sure hope this isn’t the case here. (example: “Inweb lets you mix, for example, YouTube or Vimeo videos right in with code.” … um … sure, it’s neato, but … well … why? That really has nothing to do with IF)

Also, regarding community engagement. … Well … In his talk he repeatedly talks about engagement. In fact, it seems he addresses people wanting to help here:
“My final phase of engagement is when people want to know how the program works: initially just from curiosity, but eventually some people want to be part of the crew, part of the inside loop. Obviously, that requires access to the internals. You can’t work on the engine of a car if you can’t open the hood.” …and … “For me, simply posting source code of a program is a thin description. A thick description needs all kinds of other material all well: reasons why things are as they are, practical usage data, meaningful discussion of why defaults are the way they are. For most of the world’s software, materials like that are hard to find, if they are written down at all.”
So it sounds to me like he wants to fully and totally 100% document the code. Which is of course a good thing. Those of us who simply want to use Inform 7 to write games likely couldn’t care less about this. For it to be open sourced tho, code documentation is certainly pretty important. However, it sounds like he has imposed on himself very high standards for this documentation.

Part of me fears that Graham, now being more and more directly confronted with the prospect of actually releasing his baby into the wild for others to work on and tinker with, has become … apprehensive, hesitant, anxious … about ACTUALLY doing that. Again, I hope not. That is simply my fear.

Most of his talk isn’t about progress with Inform 7. It’s about the philosophies behind it and his desires for the outcome. The only real indication of where thing’s stand is the final slide. Also, he asks for questions. Is there any transcript of the question-and-answer period? 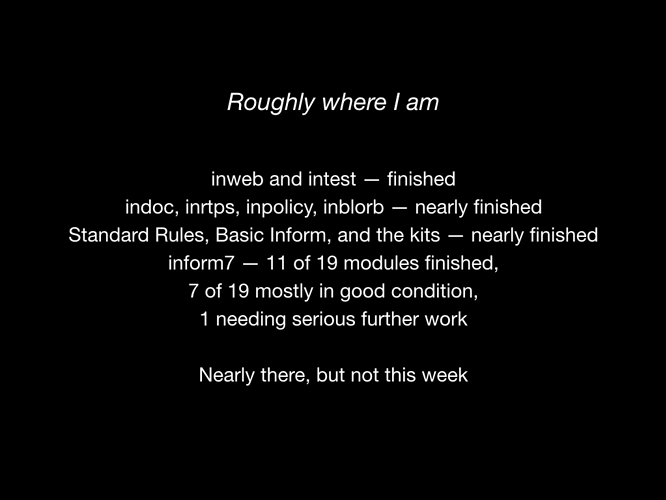 CRAP!! Windows 10 is now required?
Yet another reason for me to “upgrade” this computer. Which was never meant to run 10. Heck! Win 10 didn’t even exist when I built this machine. And I don’t consider Win 10 an “upgrade” from Win 7. But this makes it now … what? 6 pieces of software? 7? That I use that no longer run under Win 7. And building a new machine is simply WAY too expensive right now. I looked into it last year. Ouch.

I have the SSD I need to clone my boot drive so I can do an “upgrade-in-place” but am a bit loathe to do so because I know it’ll take … Awhile! To say the least. And there will undoubtedly be problems I’ll need to fight with. In other words, it’ll be a pretty irritating day when I finally plunge into it. :\

Not necessarily. It says so on the Github page, but if you list all the releases there and scroll down three releases, you can see that 6M62_2018 (Inform 7 6M62 for Windows, February 2018 update) is “the last release that is tested on Windows versions prior to Windows 10” (my emphasis). So the requirement is more a way of saying “not tested, not officially supported” on Windows versions prior to 10.

I’m running the latest beta3 release of the Windows IDE (from November) on Windows 8.1, and it seems to work fine, as far as I see. (Although I think there’s an issue with the button that copies code examples from extension documentation – that doesn’t work for me. The button to copy examples from the normal included documentation does work.)

OHO! Well okay. Thanks. I’ll give it a shot. These days if something says it requires Win 10 I don’t even try anymore.
Is it safe to have both versions of the IDE installed at the same time?

I’ll get around to the “upgrade” sooner or later. Just have to motivate, bite the leather strap, and go at it. I have attempted such “upgrade-in-place” before and it was … yeah. It was a thing. Eventually mostly worked except sometimes not, for no apparent reason. That’s what I’m afraid of doing it on this machine, which is why I’m going to clone the OS drive as-is, with a full OS setup that I can simply plug-n-play if need be. I mean … As is, this machine is fully capable of creating a full feature length movie. Heck! When I can build a new box I hope to keep this one running.
Why upgrade-in-place instead of fresh install? GOOD LORD the amount of software I have installed!!! How I’ve configured the system over the many years of using. Reassembling all that would just be too much man. Too much.