The game does end, though, if you escape from each of the nightmares.

Ah! I tend not to replay much. I’ll go through a Petite Mort about twice since they’re short, but generally replay is not my bag. I do want to see how this ends, though, so I’ll go back. I’ll correct my review.

Thanks so much for reading Blackout Amanda!

I’m so glad you enjoyed it.

As for the double-click, it’s something I’m experimenting with to increase the friction of Twine a bit. At least for myself, progression can almost feel so effortless that I start to skim while reading the text, especially for text-heavy games. I wanted to see if implementing a double-click would slow down the pace, if only for a couple milliseconds. I’m trying it out in a more ambitious project as well and interested to see if it continues to be annoying.

I thought a lot about how I’d spend my 7 days after playing your game, and decided that this would be an excellent time to try opium. Go ahead and assimilate me then-- you’ll just get a drooling idiot of no use to your collective.

I’ve been thinking of adding a couple more branches once voting is over, and opium stupor definitely seems like a viable option

There Those Dare Doze, by Andrew Schultz

The Enigma of the Old Manor House, by Dercomai

I couldn’t figure out how to play this. I downloaded the file, looked at all the subfiles in confusion, and moved on. If anyone has advice for the technologically challenged here, I’d love to hear it.

And a word on my game, ZIT

And that’s all the Petite Mort games, I think. Well done, everybody!

There are three endings, but the balance of how likely you are to get each one is probably kind of wonky because it’s a Petite Mort game and no one playtested it but me. It would have been less wonky if I had just made each option give you one point towards the relevant ending, but I wanted to weight the choices to allow for an escalation from pretending everything is fine to being moderately honest to being completely honest. That’s a progression that makes a lot of sense from a characterization standpoint, and I felt like it would be odd for that to be exactly as likely to get you a bad ending as doing the same thing in reverse. But of course, weighting the choices made it more complicated to keep track of the likelihood of reaching each ending (especially because I’m bad at math and was just kind of trial-and-erroring my way through making sure that the aforementioned escalation was possible).

You’re right about my priorities vis-a-vis the polish of the writing vs. the length of the game – I did kind of wish I had room for a slower buildup, but, you know, four hours, and in the end I thought quality was probably more important than quantity.

Anyway, thank you for the review, and I’m glad you enjoyed the game!

Oh, dang. Sorry about that. I’ve been busy with my new job and haven’t checked back on my own game page (I have been chowing down some other Petite Morts and will probably also post some reviews soon), so I didn’t realize that the HSL Type Omega MEWP Certification Exam wasn’t takeable online. The exam portion is implemented in ChoiceScript. There’s probably an easy way to make it readable in-browser on itch.io that someone savvier than myself with either platforms could point me toward, if so that would be great. I’d wager it’s probably something staggeringly simple.

Otherwise the supplemental manual portion should still be accessible, as it’s just a .txt file last I checked. Although I get too that if you’re reviewing the entries, you might want to review just the exam portion, cool. The manual is there more for people who either want to study for the exam seriously (not needed), look up answers during the exam (also not strictly necessary), or as an option for anyone who might want to sink their teeth into it a little more (there’s plenty of material/spooky bits/jokes in the manual that have no related question or reference in the exam portion).

If you did want to take the exam in your browser from the downloaded .zip file, you can drag and drop the index.html file from the main folder into your browser and then when prompted, upload the folder. Apologies again about that.

I should also get it to post my name instead of my handle in the by-line.

Update: Well, I was able to change the display name (it’s under account settings, not the game page) and compiled the game into a single .html file (by running the helpfully named “compile.html”), but I still haven’t been able to make it playable in-browser from itch.io. I’ll keep trying, but hopefully these changes help for now.

You can make a ChoiceScript game playable in itch by uploading it after compiling and checking the “This file will be played in the browser” box. You probably also want to configure the embed options. These are the settings I used for my entry: 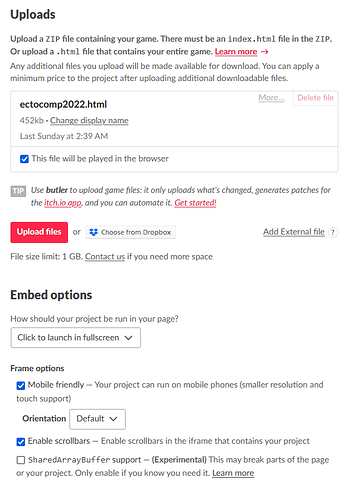 Also @AmandaB I’m impressed by how much you get done, The Spectators is pretty impressive!

Also @AmandaB I’m impressed by how much you get done, The Spectators is pretty impressive

Aw, shucks-- thanks. That’s what can happen when you ignore all your real responsibilities and spend all your time writing free games instead of making money.

Thanks for your review Amanda (and for testing!).

And well done for getting through all the Petite Mort games so quickly - great reviews!

Thanks for this help! It looks like I didn’t have my game option set to HTML, so I wasn’t seeing that option. I switched it over and there it was. I appreciate your help.

So yeah, my game should now be playable in-browser. Woo hoo!

And the very last of my Petite Mort reviews, now that I can play this game!

I’m glad to end on this one, because it’s great on a lot of levels. First, it’s really funny. Second, it’s a genius design for a Petite Mort, because the bulk of its text is in a feelie (a user manual), and feelies are not included in the 4 hour time limit. I am feeling really, really jealous of this idea. Green, really.

Anyway, the manual is long and you will think, “I’m not going to read all this.” And then you’ll read all of it because you’ll be laughing. The last brilliant thing about this is that the game itself is a quiz over the material, which is an easy format, so the author had all 4 hours to make a lengthy quiz with extremely funny choices, which are typo-free, well-written, and look as if the author was just rolling around luxuriously in extra time to make things perfect. There’s that jealousy again. Anyway, I’m rating this 5 stars, not just for how good it is, but for how smart it is.

Hey Amanda, thanks for playing my entry!

Speed of text has been something I’ve received lots of comments on, so I’ll definitely be speeding it up after the voting period finishes!

Aw shucks! Your review is too kind, you’re making me blush. Thank you so much, I’m glad you enjoyed it.

I assure you though that “luxuriating” is about as far from describing my temperament on the day I submitted the work. Between getting everything typed up, still having to pick up new equipment for the job, and other stuff I was an anxious wreck. But I was glad to be able to do the most useful thing I could with my anxieties: make a little art. There are definitely some typos in there (one on page 34 of the manual, technically question 9 in the exam has an error where I forgot to say “haunted” in front of “scissor lift” [because that would just be a boring, ol’ group A type 3 MEWP and we want the omegas]… I’m sure I would find others if I re-re-re-re-re-read it again), but it’s ECTOCOMP and part of the whole deal is to counter the tendency (a major one for me) of self-censoring or perfectionism or thinking it’s not good enough in some way yet or any of that so for now I’ve decided to just let it be.

But wow yes, thanks again for your review, very much appreciated. You made my day!

The trick is to punch the undead gorilla repeatedly; one punch isn’t enough. That unlocks the next part of the plot. Eventually you can find the bad fairy’s secret hideout.