Do you ever get the weird feeling you’re a character in an adventure game?

Local Big-Box Store
It’s a busy Sunday night, and there are no employees anywhere. Carts whiz around as shoppers finish their shopping before Monday morning.

There are glass doors here behind which dairy items are kept refrigerated.

OPEN DOOR
You open the door. There is milk, half and half, milk derivatives made from nuts, and - Huzzah! - One carton of heavy whipping cream left.

GET HEAVY WHIPPING CREAM
There’s only one left, and it’s on the very back of the very upper shelf where you can’t reach it. If only someone was on the other side to push it forward toward you.

TAKE HEAVY WHIPPING CREAM
Not unless you grow two more feet in height, and possibly another foot on your arms.

GET HELP
No chance. All the employees are on their smoke break, and avoiding customers.

This section of the store is much quieter, and sells all manner of cleaning supplies.

TAKE BROOM
You select a sturdy broom from the shelf.

OPEN DOOR
You open the dairy case door, enjoying the cool draft emanating from within.

GET HEAVY WHIPPING CREAM WITH BROOM
Shoppers gaze upon your audacious move in shock and a little admiration! But you are able to knock the carton of heavy cream toward you enough that you can reach it.

[Your score has gone up by one point.]

well, I guess nothing beats my day-to-day life.

I actually live in a large and hopelessly eccentric mansion: think Hollywood Hijinx, Humbug, the opening of Curses, among others…

Example, ten daemons (cats) whose start together when I begin coding, if I don’t lock the door… (No wonder that I have too many WIP around,) the usual array of temperamental devices whose works only with the appropriate handling (never the intuitive ones…), a garden whose, if not cared, became a Vietnam-grade jungle, and a totally unknown & inpredictable plumbing & electrical layout (of the “don gloves. switch light” grade) and let’s not dare to enumerate the items Near every day something to fix, and in many cases, with adventurer-grade ingenuity and cunning.

When making Calm, Melvin and I would go out and test our puzzle solutions for verisimilitude. He could accept that you could use a mattress to smother a spiked fence, but he was sceptical about using a doormat for the same. So we took my doormat and went looking for a fence. When I was able to break into an electricity substation with aid of the mat the solution was included.

You breached an electric fence in the name of IF…!

Rehearsing in my head, “But officer it wasn’t breaking and entering really, my motives were purely educational!”

Rehearsing in my head, “But officer it wasn’t breaking and entering really, my motives were purely educational !”

“BUT OFFICER. PLEASE LET ME EXPLAIN THE STAKES FOR IFCOMP - wait, are those handcuffs?”

The only time I was arrested I was immediately unarrested and I think it had something to do with the size and content of my adventure game sized inventory. They thought I might be equipped to steal copper from an abandoned building. Instead I had in my pockets and the lining of my jacket:

Has anyone in history actually ever needed to utilize the Zork 2 locked door/ key in lock/ place mat/ letter opener puzzle in real life and my follow-up question is: Did it work?

I’ve used the card-in-the-door-gap trick, I’ve even opened locks using a snapped headphone set, and a sword and broom combo, but never the keyhole push. I blame not encountering that style of key very often. If you did encounter that situation, chances are the key would be slightly turned in the lock, preventing it from falling. And even if it could fall, what door is so draughty as to have a space at the bottom wide enough to slip a whole newspaper and key?

You’d probably need to be in a really old house using skeleton-type keys to be able to make the keyhole push actually work.

I have once managed to push a key just enough with my key to open the door from the outside, but I was lucky and it was perfectly aligned. The many other time the key was in the lock, it was turned a bit and wouldn’t move. Being able to push the key out seems rather unlikely, let alone pulling it under the door.

I seem to recall seeing the placemat under the door trick to catch the key popping up in assorted stories written in the late 1800s.

I believe Scratches turned that puzzle on its head a bit.

I liked how the push key to paper puzzle in Anchorhead is implemented: if you’re like me and forget to put the paper down before pushing the key, it ends up in the tunnels, giving you an alternative solution.

yea, in XIXth Century doors are often with draft space between floor and bottom of the actual door (think about that back then, heating was usually done with fireplaces, and you will see the logic), and, yes, this eccentric mansion still some definitively NOT airtight doors and windows…

OTOH, I think that keeping keys in the lock ease lockpicking (picking on keys instead on tumblers… mhm… now we have an interesting unusual puzzle)

Not sure that TV counts as “real life” but still… 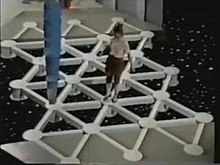 The Adventure Game is a game show that was originally broadcast on UK television channels BBC1 and BBC2 between 24 May 1980 and 18 February 1986. The story in each show was that the two celebrity contestants and a member of the public had travelled by space ship to the planet Arg. Their overall task varied with each series. For example, the team might be charged with finding a crystal needed to power their ship to return to Earth. The programme is often considered to have been a forerunner of T...

There’s the flip-side of this is in a quotation in the old Inform Designer’s Manual:
The odyssey of `Zork: Mimesis’ begins in a field behind a white
house. You climb in through an open window, take the water and
sack lunch from the table, go in the living room and move the rug
aside to reveal ± a blank floor! : : : Soon the owner of the house
± an underemployed, alcoholic bricklayer ± is covering you with a
shotgun as his unfaithful, neurotic wife dials 911. The puzzle-free,
super-literary action continues as you are funneled through the
criminal justice system: : :
– Roger Giner-Sorolla, conceding that mimesis is not everything

I didn’t even know there was such a puzzle in Anchorhead when in my Cragne Manor room I implemented an old-fashioned lock with a placemat halfway under the door, and a bunch of messages related to the fact that you might expect to get the key that way, but you couldn’t, because the key wasn’t in the lock.

uh well it wasn’t a real life/text adventure situation like most of these posts describe but I did have this dream last night where I finished building this game I’m hoping to finish in time for the ectocomp but I accidentally switched the spooky atmospheric soundtrack with really dorky, upbeat bebop jazz and nobody could make it past the first few rooms because the juxtaposition was just so awful and I legitimately woke up in a cold sweat so does that count

Several years ago I wrote a “game” that was just a simulation of the computer science department at my uni.