A few suggestions for the Twine GUI

Make if links in editor active so you can navigate within the editor window through your story.

What’s this referring to? Twine? Something else?

I’m not the principle developer of Twine 2, however, this really isn’t the place to ask for Twine 2 enhancements. You should look at Twine 2’s issue tracker to see of any of these feature requests already exist. If so, then simply add a comment to show your support for the request. If not, then create a new issue for the requested feature.

That said, I do have some commentary on some of your requests.

Make if links in editor active so you can navigate within the editor window through your story.

Twine 2 does not understand anything other than static uses of the basic link markup—and even that is problematic as it can mistake other syntax for links. Until that changes, any such feature would be sorely limited.

Assuming you mean the story map view, there’s an existing button in the lower right to add new passages.

Look at the Edit menu in the toolbar, at the top, there’s already Undo/Redo functionality. It traditionally hasn’t worked very well, but it is there. 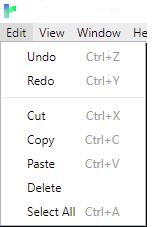 That’s a long ask. I mean, there’s only so much room in the passage icons, and as you make them smaller that space gets more and more limited.

In addition to what others have said, the in-progress Twine v2.4.0 project lists this as a feature to be added to that version: “Allow passage names to be visible in highest zoom setting”

So that one’s already in the works.

Maybe hover over would work better. I’ll try to find the suggestions area in forum.

Ok, good to know there is undo and redo. I’ll try to find the appropriate place for suggestions.